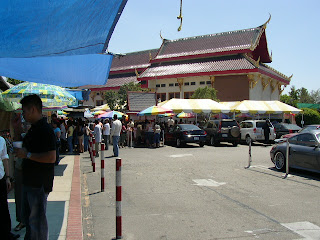 The Militant returned to the heated environs of the San Fernando Valley on Sunday afternoon as he got to visit the Wat Thai Buddhist temple weekend food court in North Hollywood, which was rumored to be closing (as outlined in his previous entry in this here blog). After a 45-minute transit adventure (more below), the Militant worked up both a hunger and thirst to consume mass quantities at his destination.

The Militant didn't even have to walk far after alighting the bus when he arrived on the grounds of the temple. He expected crazy-go-nuts level crowds but it looked like a normal Sunday, albeit the Militant arrived at around 2 p.m. Though the Militant had been to Wat Thai before to volunteer for a cultural event in 2004, he was not able to sample the food court per se.

If it were not for the dry Valley heat (and substitute it for something far more humid), this would have felt just like Asia. The crowd was predominantly Thai but also attracted a few Angelenos of different ethnicities, including white tatooed hipsters, blacks, Latinos, South Asians and Filipinos (who, were it not for their conversations in Tagalog, would have easily blended in with the Thais).

At the token booth, the Militant plopped down $13 worth of food tokens and delighted himself on mint leaf chicken with fried egg over rice, a beef and a chicken satay and fried banana. But the sheer East Valley heat alone caused the Militant to quench his thirst with a Thai shave ice desert (yes, the Militant was gonna write up Part 3 of his Ethnic Iced Dessert Quest series, but not enough data this time around...), fresh coconut juice (in a coconut core) and a Thai iced coffee. Actually, make that $12.50 worth of food as he was left with a round yellow plastic souvenir when all was said and done. 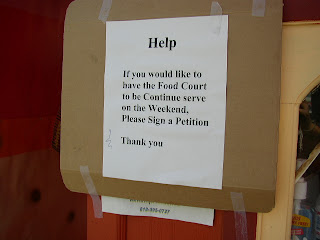 The Militant did spot a sign at the food token booth (pictured right) regarding a petition to save the food court as a good percentage of the proceeds of the token sales do go to benefit the temple, the spiritual and cultural center for some 500,000 Thais in Southern California. The Militant happily obliged to lend his real name, address and signature to the petition and asked the woman canvassing signatures more details. He asked her who exactly was shutting the food court down, but all she said was "The neighborhood is threatening to get the City to shut us down." The petition, which according to temple staff, needed 3,000 signatures, would be submitted to "Our local L.A. City councilmember" (though not mentioned by name, that meant 2nd District Councilwoman Wendy Greuel).

According to one of the Militant's reputable operatives in the Thai community, there have been three things going on in regard to both the foodcourt and the temple itself. First, the Los Angeles County Department of Public Health has recently made their annual inspection and will shut down the food court due to its findings. But the Militant's operative said such closures are normally only temporary - unless there have been gross and extreme health code violations, establishments shut down by the LACDPH almost always re-open in a matter of weeks.

The second issue was general complaints from the neighborhood regarding noise, traffic and loitering, which is interesting since Van Noord Ave., the residential cul-de-sac directly behind the temple, is home to not only temple members, but most of the temple's monks. The Militant's operative said that Wat Thai has worked hard to address the complaints of the neighborhood, which has included satellite parking and shuttle service at a nearby medical center for major festivals. The Militant wonders if the temple has been bullied in this matter as neighborhoods themselves have no authority to shut down something like the food court, only agencies like the Los Angeles Police Department, LACDPH or the Los Angeles City Department of Building and Safety.

The third issue was not directly related to the food court, but did make P.R. matters much worse for the temple, obviously attributed to bad timing. The Militant's operative also mentioned that the LAPD is currently investigating allegations by children at the temple of sexual abuse directed at a male volunteer (none of the temple's monks were named), who is a married undocumented immigrant (and could thusly face deportation regardless of whether the charges stand or not). Investigators have confiscated the temple's computers and other records, according to the Militant's operative. 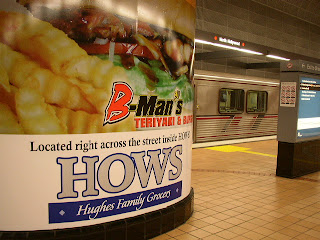 Although Wat Thai was over 10 miles from his Not Really Eastside compound, he still decided to arrive Militant-style and opted to Go (M) with a 15-minute subway ride via the Red Line and a 30-minute bus ride via Metro Local line 152. North Hollywood had changed quite a bit since the last time he was there, most notably with the completion of the Noho Commons retail center across the street from the subway station, which includes the requisite corporate coffee shop (the Los Angeles-based Coffee Bean & Tea Leaf this time, not that ubiquitous Seattle one), a Coldstone and a HOWS supermarket, which was a curious new sight for the obviously non-Valley resident Militant. It turns out, HOWS is basically a Handspring-esque incarnation of the old Hughes supermakets, which was acquired by Ralphs in the 1990s and eventually assimilated into the Borg (resistance is futile). In fact, "HOWS" is actually an acronym made up of the last names of former Hughes Family Market executives (putting to rest the gripe from transplants complaining why yet another California supermarket chain failed include an apostrophe in its name). The North Hollywood (M) station was even adorned with HOWS market ads (pictured left).

The ride on the 152 was a circuitous 8.5-mile ride through the East Valley, going up Vineland towards Sun Valley and heading due west on Roscoe to the northern border of North Hollywood. Obviously the line could have been more direct, but cuts in transit operating budgets force bus lines, especially those in the Valley, to exist as Frankenstein-like routes, patched together from segments of discontinued lines to still continue to serve their ridership in some fashion. The East Valley resembles a less-dense, dustier and scorching version of Pico-Union, peppered with taco stands and auto repair shops (in fact the entire eastern end of Roscoe is comprised exclusively of auto mechanic/body/parts/scrap businesses), albeit with the Verdugo Mountains replacing the Downtown Los Angeles skyline as the backdrop.

Yes the journey took 45 minutes, but a car trip could never yield this sort of observation, and the irate neighbors of Wat Tai couldn't blame this Militant for being a nuisance to their 'hood.
Commandeered by Militant Angeleno @ 1:25 AM

There's a How's near my house, and I had no idea that it is affiliated with Hughes. Thanks for the research, Militant.

Speaking of old grocery stores, I just passed by a Lucky store on my way to get some Vietnamese sandwiches in Alhambra. I think it was on Valley Blvd. I thought they were bought out by Vons or something.

I wonder if there's an Alpha Beta somewhere.

Lucky was bought out in 1999 by Albertson's (which originated in Idaho and whose corporate parent is based in Minnesota). The Lucky you saw probably was one that didn't get acquired and is run independently.

Assuming you don't live near NoHo, the HOWS near your house is probably the first one.

As a parent of children attending the temple school, I suppose I should take Wat Thai's side in this, but I find myself sympathizing strongly with the neighbors.

The Food Court has gotten way out of hand and the weekend crowds simply overran the adjacent neighborhood and showed very little regard for the people living there (if I lived there, I'd be extremely unhappy about the temple). The monks are good and well-meaning people but have shown very little sensitivity or forethought. They have been way too passive in letting things deteriorate to this point.

There may be a positive side to this -- it could force Wat Thai to reexamine its original mission (which is religious, linguistic and cultural, and which has nothing to do with being a foodie Mecca). The Food Court largess may be history, but perhaps this will require L.A. Thais to return to self-reliance in support of the temple's original mssion.

mahom: Thank you for your interesting take! The Militant welcomes different points of view -- as long as they come from people who are directly connected to the issues, as you are.

RE: Lucky
Supervalu, which now owns Albertson's and says it still owns the rights to the Lucky trademark, has suddenly started coverting a handful of stores to the Lucky name (perhaps to preserve the trademark) -- including the one in Alhambra...
Check out more info here.

I used to visit Wat Thai regularly when I lived in L.A. Now I'm living in Thailand and see that they run things the same way at the temples here. They are big community centers with all manner of noisy activities. In Thailand the neighbors don't seem to mind. It's normal for them. In America it certainly is considered an intolerable nuisance by the neighbors.