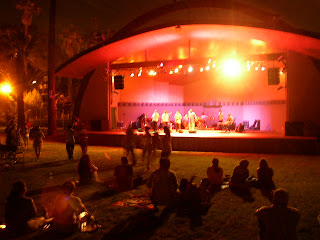 When the Militant goes on his frequent mass nocturnal bike rides around town, along with tens to hundreds of people, there's usually a theme to the organized ride. But even when the Militant goes off on his two-wheeled solo reconnaissance missions, he still tries to place a theme to them. Heading from the Militant's compound to Downtown Los Angeles and back on a warm summer Thursday night, illuminated by a crescent moon and the omnipresent lights of the city, the Militant dubbed this 10-mile trek, "The Urban Renewal Ride."

The first stop on this ride was the new Levitt Pavilion Los Angeles (pictured above), which, since August 8, has re-animated the formerly lifeless body of the MacArthur Park bandshell on the northwest edge of the park. Thursday night is "Dance Rhythms" night in the Pavilion's Wednesday- thru-Sunday concert schedule, and the Afro-Cuban sounds of Ricardo Lemvo and Makina Loca not only filled the northern half of the park, but got the crowd of some 200-plus Angelenos - many of whom live in the nearby neighborhood - of all races and ages into el ritmo. True to the day's theme, a good number got up in front of the stage and salsa-danced on the lawn, while small children ran and played. This energy was what had been missing from this park for so many years, and after the concert ended at nine o'clock sharp, some people in the crowd, including whole families, took the opportunity to stroll around the park, which is still shaking off its "hellhole of urban blight" reputation. 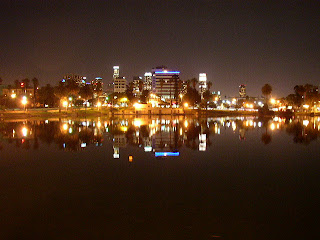 The Militant also took the opportunity to stroll (well more like pedal slowly) around the park, from the pedestrian tunnel cutting under Wilshire Blvd. on through the circumference of the lake. Though there was a certain amount of trash and questionable aromas, this really is a beautiful park, or at least it truly can be. The nightime view of the Downtown Los Angeles skyline and its reflection from the western shore of the lake (pictured left) is the closest one can get to a waterfront view of our city's skyline.

The Militant got back on the streets, heading east on Wilshire, passing the massive Home Depot shopping complex, which is also home to Pico-Union's first Starbucks. The Militant also saw the LAUSD's new John H. Leichty Middle School, named after a school district administrator who died in 2006, as well as a few condos. Then it was due south on Flower street. 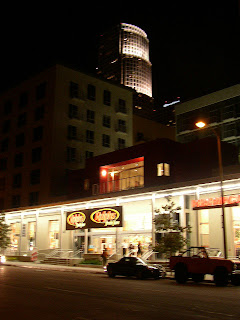 While Downtown blog-guerrillistas got the first dibs at covering the new Ralphs store on 9th and Flower during its long-awaited debut last month, the Militant gets his shot by visiting DTLA's first new supermarket in half a century (THANK YOU Ralphs people for the bicycle rack in front). Night time is the right time for this 5 a.m.-to-Midnight operation as the curb on 9th Street, which can accommodate about 15 parallel-parked cars, is the prime spot for shoppers -- even more convenient than parking at a standard supermarket lot. There is a larger subterranean parking garage though. But most of all, as the Militant rolled in, he saw some Downtowners walk home with their groceries, some using take-home carts. Now that's the spirit!

Now that the opening week mayhem has died down, the Militant got to stroll down the neatly-stacked aisles and counters with items bursting with color. Okay, the Militant will shut up now. Just look... 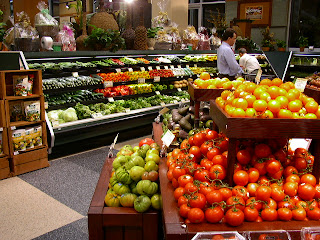 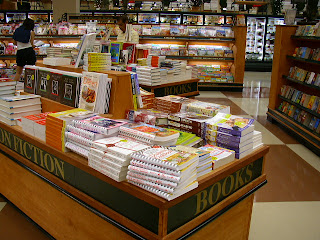 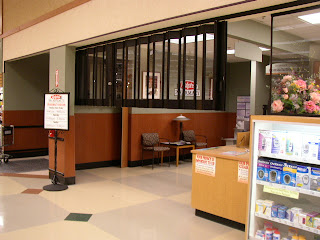 People over 4 feet in height are not allowed in the
Downtown Ralphs pharmacy after 9 p.m. 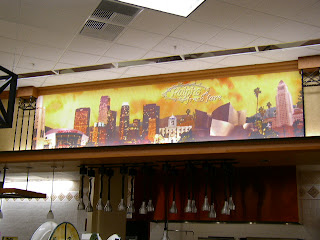 Even the designs on the walls make the Militant proud.

The Militant bought three oatmeal raisin cookies from the bakery and a bottle of Wild Cherry Propel. On his way to the counter, the Ralphs security guard called on the Militant, pointed to his camera and said, "Amigo! Amigo! No pictures." The Militant wryly smiled and said, "Oh, Okaaay!" the security guard dude not knowing the Militant had already taken his shots. But then once in the checkout line, after having his cookies and flavored fitness water scanned, the checkout dude said, "$2.91...do you have your Ralphs card?"

"No..." the Militant quietly grunted, more focused on taking out two dollar-bills and some change. "That's $2,91, right?" the Militant tried to confirm.

"Oh?" Uh, OKAAAY..." the Militant said on the outside while saying a loud, resounding, "HUH?" on the inside.

Oh well, guess being a Militant does have its privileges after all...

After having his snack, the Militant mounted his two-wheeled chariot down Flower street, passing restaurants like the brand-spanking-new Liberty Grill and The Palm and followed the (M) Blue Line tracks. Though more industrial in nature, there's a lot of future potential on these blocks for some cozy next-to-the-tracks eateries, cafes or shops - familiar sights in places like Portland or Frisco. Down by Washington Blvd, Flower is partly cordoned-off with construction barriers, all in anticipation of the Exposition Light Rail line. With the (M) Grand Avenue station being the aphelion of the Militant's Urban Renewal ride, he headed back up Figueroa and got to check out the latest on LA Live's progress. The Nokia Theatre (pictured left) was slowly taking shape as the Militant was already imagining how integrated the new development would be with Staples Center -- especially on nights where there would be concurrent events in both venues. Heading up Fig, in addition to passing familiar institutions like Cafe Riordan, the Militant also biked by newer storefronts like the Downtown Famima!! Japanese export convenience store and Roy's Hawaiian Fusion restaurant a few doors down, where the Militant had some nice and memorable dinners within the past eight months. 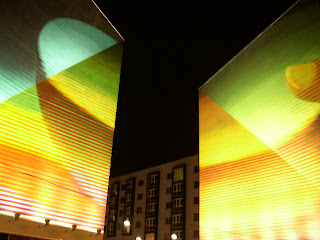 Heading back due west on Wilshire, the Militant caught sight of the new Royale on Wilshire restaurant and lounge, apparently one of the up-and-coming music venues in town. Not much far up ahead was the new Wilshire Vermont Station TOD nearing completion, complete with its own spectrum-colored mural (pictured right). While Franklin Avenue ('Sup, Mike?) sees this as two murals (one being "The Wilshire and Vermont Fingernail"), the Militant sees it as one piece of art - the fingernail being part of a hand holding an empty bowl, presumably a metaphor for a melting pot, as the image is made up of various prismatic colors. The image is broken up by the view of the complex's housing, whose residents would represent be the ingredients of the great multicolored melting pot in the mural...

...At least, those who can actually afford to live there.

Commandeered by Militant Angeleno @ 12:21 AM

Funny, I'd never looked at the mural from that angle... it definitely makes more sense from that perspective. But I still can't escape the fact that that fingernail kinda grosses me out.

Behold, the wonder of art! And besides, there are worse human body extremities that could be portrayed...