Xavier Self A Merry Little Coffee 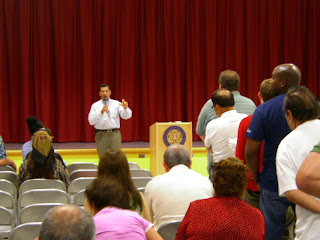 The Militant, may not have had the opportunity to hang out in the Dodger dugout with a U.S. congressman, but he did spend noontime Saturday with him and fellow constituents (that is, making the hypothetical assumption the Militant is a constituent) as Representative Xavier Becerra hosted a "coffee" event at the new Frank Del Olmo Elementary School in the Koreatown area.

Okay, okay, the Militant will offer full disclosure: He is a resident of the 31st Congressional District (you are required, though, to publicly deny ever having read that sentence). Good luck finding the Militant, though. The Militant attended one of these "coffee" events a couple years ago when the congressman hosted one fairly close to the Militant's compound. The Militant was glad that reapportionment made him a Becerra constituent, as his previous congressman under the old district map would never do one of these events as he only cares about the more economically-advantaged members of the district.

The constituents present represented the broad diversity of Becerra's district, with a number there requiring Spanish translation equipment, and a little on the older side, yet still not that old. A line of over 30-deep lined up to ask questions of the congressman, which doubled the length of the event which was originally scheduled for one hour. Thankfully for Becerra they stuck to House-relevant issues like the Iraq war, immigration, health care, the economy and transportation. A few constituents even impassionately urged him to support the impeachment of Bush and/or Cheney, which the Democratic representative, though heavily critical of the Bush administration, felt there's no time for Congress to pursue that route. He also blamed the Republican-mandated "supermajority" rule in the Senate, which now requires a 60% approval rather than the usual 51% simple majority to pass bills - a situation which requires any Democratically-supported measure to garner a number of Republican votes to pass.

Agree or disagree with them, it's a wonderful thing for members of Congress to have a one-on-one meeting with constituents. Too many elected officials out there - on all levels of government - like to feel important and avoid any contact with the people they were elected to represent (unless the constituents contribute mad moolah for them during election season). Also, a lot of politicos do things like this only when the media is present. The press was nowhere to be seen at Becerra's Saturday event - which the House representative actually preferred to avoid sound-bite posturing (ironic though for the venue since the elementary school was named after a Los Angeles Times editor who died in 2004).

If your representative puts on these kinds of events, do make it a point to go - they are excellent ways not to only meet your member of congress, but their staff and fellow people in your community as well. If your House rep hasn't done any events like this yet, the Militant strongly encourages you to demand them to.
Commandeered by Militant Angeleno @ 1:52 AM

Uh, the Congressman seems to have engaged in a little truth-stretching. The 60-vote "supermajority" rule is not a Republican invention. Regardless of who's in power, it takes 60 votes to break any potential filibusters and move legislation forward. This is an old Senate rule, which Democrats also used to block several bills when they were in the minority. But, hey, that's politics...