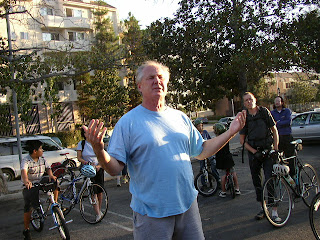 Not to be outdone by half a dozen or so members of his colleague Eric Garcetti's staff participating in a Midnight Ridazz tour a couple weeks ago, Los Anga-les City Councilman Tom LaBonge (pictured left) took to a bike himself on Thursday evening and joined riders on a 6-mile round-trip ride along the 4th Street corridor - the extreme southeast corner of his own 4th district. Organized in conjunction with the Los Angeles County Bicycle Coalition, the ride was both a social event to meet the councilman and a way to help promote 4th Street as a bicycle-friendly boulevard. 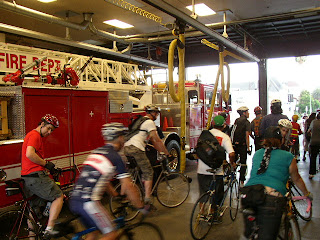 About two dozen bicyclists that consisted of constituents, staffers, bike activists, three LAPD bike cops and at least two bloggers rode against the setting sun along 4th St. from Shatto Park in Koreatown, and up the socioeconomic ladder from the dense apartment blocks on the eastern side of the street to the stately near-mansions of Hancock Park, ending at Fire Station 61 near Park La Brea. Along the way, the police officers corked (velospeak for "blocking traffic to keep the mass of riders together") most of the cross streets, and even the councilman did some corking himself. An LAPD cruiser rode behind the pack to assist any possible flats or breakdowns. At the fire station, the riders were allowed to use "the facilities," as other participants chatted with officers, firefighters and fellow riders before riding through the station on the way back (pictured right). 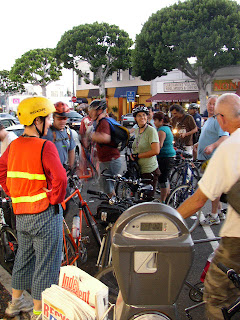 The ride made a pit stop at Larchmont Village where most of the cyclists took over a metered parking spot (pictured left) right in front of the Above The Fold newsstand after an SUV just left.

"Let's see, how many bicycles can you park in this space?" the councilman asked aloud. "Seventeen!" he said, after tallying it himself, with room for a few more bikes to spare. The Bicycle Coalition folks got excited about not only the public demonstration of the bicycle-to-auto parking space ratio, but that a city councilman gave it his blessing.

At the pit stop, LaBonge treated the riders to a free cone of chocolate chip ice cream at the Larchmont Baskin-Robbins (the chain originated right here in Southern California) as the councilman chatted it up with not only the riders, but people who strolled along the village, including the daughter of KTLA reporter Stan Chambers. The councilman, wearing a light blue t-shirt and grey shorts, walked into the Louise's Trattoria next door, meeting and greeting folks. Los Angeles is LaBonge's small town as well. 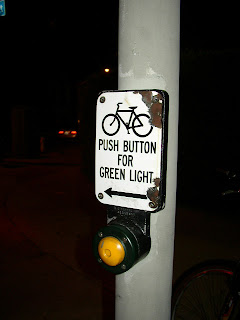 The ride went along 2nd street for most of the way this time, the councilman calling out the route, and eventually landed back onto 4th Street at Kingsley Drive. There were definite signs of the "bike boulevard" concept in more than just the green "Bike Route" signs -- at Normandie Ave., the crosswalks were even outfitted with street crossing signal buttons for bicyclists! (pictured right)

The Militant even chatted with the councilman along the ride, telling the politico how he enjoys biking in streets of the Valley at night during the summer. It might have been because of the conversation, that near the end of the route, LaBonge announced to the riders that he would make this ride a monthly event, on the last Thursday of the month, and that the next one on September 27 would go from his Valley field office in Toluca Lake on through the Chandler Blvd. bike path in North Hollywood.

See? The Militant has proven he already has influence on our public officials.

Tom LaBonge's style has been described as loud, garish, grandstanding, extroverted, showy. But the Militant got to see another side of the councilman: The city geek. Which was a good thing, as a number of the riders were city geeks as well (most especially the blogging contingent). From mentioning the historical significance of nearby Hoover Street at the beginning of the ride (it was the original western boundary of the city when it was incorporated in 1850) to Western Avenue (the city's new western boundary in 1915) to chatting about the design of the Los Angeles River bridges, this guy not only knows the city, but seems to have fun with it. During the ride back, he led the pack, not just because he was the councilman but because he seemed so damn excited about doing this, including pushing the crosswalk buttons at major intersections. He even stopped to pick up a piece of paper left on the street and disposed of it in a nearby trash bin (of course, this was in Hancock Park...). Yeah, maybe he was showing off, but unlike many other local politicians who insist on getting chauffeured around town, LaBonge seemed to enjoy experiencing the city...which is probably as close to being Militant as far as a local public official can get...(well, for now, at least...).
Commandeered by Militant Angeleno @ 9:43 AM

He is definitely a City Geek. In fact, he was honored with the first "CIty Nerd Award".

Indeed, it was pretty cool to have LaBonge listen to me pitch the idea to him (at a local bike shop, where i had run into him), but then to actually go all out and organize a ride! COOL!!!

thanks for the 4SBB.com shout-out...and just for the record, i am not affiliated with LACBC at all, although I understand that there are a few people over there sympathetic to the idea of 4SBB.

I designed the site all by hand, typing in the code, pouring my love for this idea of the 4SBB into it...not the LACBC....

I hope he cleans up his Chandler Bikeway before he rides on it.

It would be pretty embarassing if everyone saw what a disaster it is.