Secrets Of The Metro: A Gratuitous Plug For The Blue Line

Our 21-year-old light rail leg known as the (M) Blue Line is quite a workhorse. Shuttling riders daily from Downtown Los Angeles to Downtown Long Beach and back, it carries everyone from white collar commuters to homeless people, from seniors to infants. Though the Westside-based anti-rail publication known as the LA Weekly has given the Blue Line a bad rap, 90,000 commuters daily can't be wrong.

On a recent Blue Line ride, the Militant, a bit fatigued after biking several miles around Long Beach, plopped his ass down on one of the side-facing seats and saw one rider chat away on his iPhone, looking a bit worried. The train, just leaving Long Beach wasn't yet full of riders on this particular evening, so the iPhone-chatting rider lifted up the retractable three-seat bench (meant to be folded to accommodate wheelchair riders) on the right front side of the car and plugged his phone charger into a single power socket located in the wall underneath the seats to keep his iPhone juiced up. 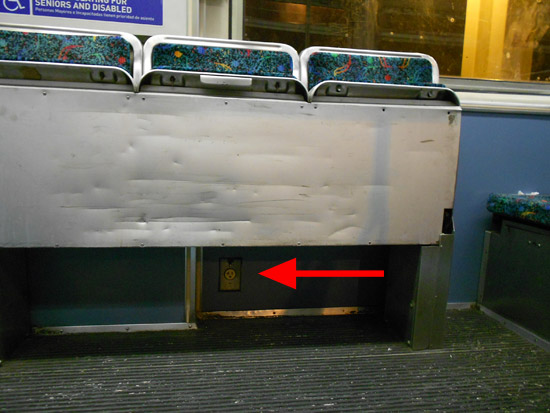 The Militant, being a veteran Blue Line rider since 1990 and previously thinking he knew everything there was to know about the Blue Line, hung his mouth open in disbelief.

Of course, back in the early '90s, the people who could afford cell phones didn't ride public transit anyway, and the only portable items that riders used back then were portable Discman players and Nintendo Game Boys. If the power started to falter during that Color Me Badd CD or challenging Tetris round, one could buy a set of AA batteries from the various illegal vendors roaming the train.

Twenty years later, we live in a world of iPods, iPhones, iPads and iCouldnameahundredotherportableelectronicdevices. We need our juice and are useless without it. Being mostly above-ground, Blue Line riders can read their RSS feeds, update their Facebook statuses or read up on the latest Tweets to pass the time on their up-to-an-hour-long commute.

But there it was, a working plug (well two, one on each end of the car) in every Blue Line car.

Being that the cars were made in the late '80s-early '90s, their use obviously wasn't for portable electronic devices but for cleaning and maintenance. When the cars go back into the North Long Beach Yard along the 710 every night, they get cleaned up. The plug was intended for maintenance workers to plug in vacuum cleaners, steam cleaners or various test machinery. They may or may not actually use them.

What makes the Japanese-built Blue Line cars extra special is that they're the only Metro Rail cars that have 'em: The Italian-built Red Line or latest-generation Gold Line cars don't have them, and the German-made Green Line/early Gold Line/eventual Expo Line cars lack them as well. Chalk it up as Japanese ingenuity, or just the simple fact that Japan has a compatible power voltage as the US does.

So now that the "secret" is out, feel free to plug in and charge up...But PLEASE do The Militant (and each other) a favor and LEARN TO SHARE. We certainly don't want anyone stabbing each other because of this!
Commandeered by Militant Angeleno @ 2:07 AM

MILITANT!!! So help me god if Metro staff now cap those over because you talked about them!!!! Oh Em Gee...it is like explaining what Animal Style is for the local hamburger place. It's like posting Vegas pictures on Facebook. Should I go on!!!???

PS: there are electrical outlets at Patsaouras Plaza too...

Ginny Brideau: If Metro does cap them over, at least The Militant will take comfort in knowing that he made his indelible mark on the transit system.

In the underground subway waiting area are electric plugs for the floor polishing machines. I saw someone charging up their phone there too.

Those trains are going to be replaced very soon. The contract should be announced in the next 12 months.

It surely looks like the ordinary travelers have found answers for their most common need like getting their gadgets charged.

it's posts like this and the ciclavia guide that make me wonder why this blog isn't called "helpfulangeleno."

Re: annon said "Those trains are going to be replaced very soon."

Nope. The new trains will help expand the system. The Expo line and the Foothill gold line extension will need more trains. The current Blue Line trains will probably be used another 10 or 20 years before being replaced.

Anonymous & Joseph E: Actually, the Nippon Sharyo Blue Line cars will all be refurbished in the near future, updating them with modern features and lengthening their lifespans. The Militant sincerely hopes they would at least keep the power plugs intact!

I learn something new everyday!

Thank you Militant! This is so awesome! Now I have another reason why I've carried a three-plug adapter with me wherever I go. Previously I used it so I wouldn't hog any coffeehouse outlets I'd plug my laptop into.

I had heard rumors about charging ports on the blue line, and last time I rode Expo, I looked for them, but I was in a Siemens train car. Hopefully they are still there, hopefully
Metro sees that this is a slight incentive for people to ride. I do hope that the old sharyo cars keep being used in the system, hopefully they repainted silver like one car was at one point. It really helps them look more modern. As for visibility, they can add a a yellow reflective decal to the front like they have planned for the new kikisharyo vehicles.

actually there are 4 plugs per train, there is also two near the center articulating section of the train.