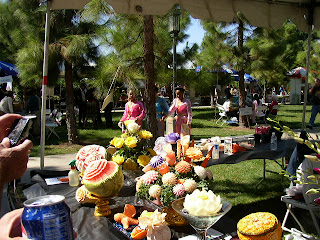 Both cities' names, in their respective languages of origin, mean "The City of Angels."

In this particular City of Angels, there are over 80,000 people of Thai descent. In addition to Thai Town, the community is distributed into various pockets, including North Hollywood, Orange County, the Westside and the Pomona Valley/Eastern San Gabriel Valley area. 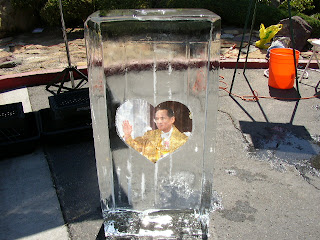 At the festival, there were likenesses of Thailand's American-born (Cambridge, MA) monarch, His Majesty King Bhumibol Adulyadej on blocks of ice (pictured right) or on canvas. Middle-aged Thai women hawked and bargained over silk clothing and high-school and college-aged Thai American youth just hung out. There was even a historical re-enactment display of 16th-century Siam with actors dressed as Portugese traders, who, despite their presence in the country, never colonized it. The trade eventually influenced many facets of Thai culture, such as the import of spices from India and Arabia and chili peppers from Mexico, which made its eventual imprint on Thai cuisine. Thailand is the only country in Southeast Asia that was never colonized by a foreign nation.

As endemic to any cultural festival, there was a food booth, but it sorely paled in comparison in terms of value to the much-missed Wat Thai weekend food court - a $5 "combo" at the festival got you a small bowl of rice and a meager, arbitrarily-selected chicken curry dish, despite having abundance of other dishes available. Oh well. At least no one can accuse the Militant of not supporting the cause.

On a better note, there was even a cultural tourism walking tour of Thai Town organized by LACommons. the Militant isn't allowed to report on whether or not he joined the tour, but operative reports revealed that the tourgoers learned a lot about the neighborhood, Thai cuisine (including the Thai concept of "yum," which is the balance of the four elements of Thai food flavors: spicy, sour, sweet and salty) and even stuffed themselves on generous amounts of free chow (and their inherent yum factor), courtesy of Hollywood Thai and Red Corner Asia. 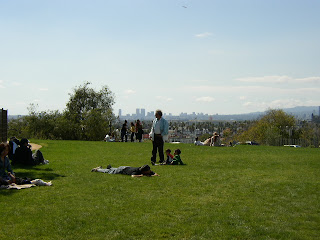 A couple of the Militant's operatives were spotted at Thai Cultural Day, most notably Blackbird and Stingray. And perhaps the "bonus" reward to being there at the festival was the view of the Westside from Barnsdall Park's Great Lawn (pictured left).

Culture, a great view of the city and a recently-rainwashed sunny day in the City of Angels -- days like this the Militant lives for. But then again, it's just another day in the life of the Militant.
Commandeered by Militant Angeleno @ 12:15 AM

Thailand country has very interesting culture. It was very interesting to know more about thai culture when I was in Bangkok. Where else but Thailand can visitors cruise on a converted rice barge, roar upriver in a long-tail boat and take a white-knuckle ride on a bamboo raft, then stay in jungle tree houses as guests in the homes of hill tribe villagers, or on raft houses floating on a river?

Thailand Property: The Militant considers himself to be a world traveler, having been to three continents so far. One of these days he plans to visit Thailand, but would like to learn more of the language from some of his local Thai community operatives first.