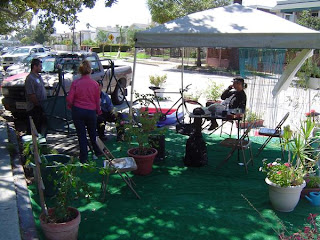 The first Park(ing) Day in Los Angeles is now history -- but what an effort. Over 40 sites were made in various communities, with the majority in the dense center of the city, which is likely a sign that Los Angeles has more of a center than most people give it credit for. Most of the sites were built or designed by artists, urban planning students/academics or architects. But a noticeable amount of plain old community folk got involved, including one neighborhood council, which was the only one in the city forward- thinking (and dare the Militant say, "militant") enough to create not one but two parking sites.

The Militant was involved in an unspecified number of "park"s on Friday, and though he cannot divulge which one(s), he can describe, via his network of operatives, which ones he knew of. One park in Larchmont Village was composed of sod and borrowed plants from a local nursery strategically placed in front of the City-owned parking lot which drew lunchtime visitors and children into its sketchbook. Another located near Wilshire and Western consisted of balloons on a patch of astroturf. A Thai Town "park" had a trailer and a makeshift astroturf campground while one not so far away in front of Los Angeles City College had a canopy, potted plants, a swinging bench and a kiddie pool. Some of the more ambitious sites were in Downtown, with one on Main Street comprised of native tall grasses and a bench made of bales of hay. The granddaddy of them all was one on Traction Avenue in the Arts District which took over an entire traffic island with sod and wooden pallets and invited kids from a Little Tokyo preschool to come play.

The problem the Militant found with the parks, including his own, was that though many passers-by supported the idea, they didn't quite get it. They didn't hang out in the parks, instead viewing it as something more akin to performance art or some sort of protest. 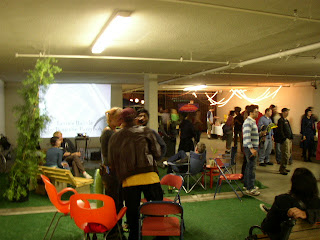 The day ended with an after-party at Public Counsel's parking structure (originally planned in the lot but moved to the structure due to the impending rain) in the Mid-Wilshire/Koreatown area. The party wasn't very happening, but the Militant was able to chat with fellow "park"-makers and see about three other "parks" re-located there (pictured left). A number of the partygoers decided to live out the childhoods they never really had by scrawling chalk drawings on the parking structure floor. Um, yeah. So unlike the Earth, Wind and Fire song, this 21st night of September wasn't that memorable.

Park(ing) Day was observed in over 40 cities across the United States, with Frisco boasting the largest number of parks (over 50), Los Angeles in an impressive second place with over 40 and NYC taking the bronze medal with over 20. In Seattle, the local press has already opened up the issue of funding for more parks in that city.

Today's Los Angeles Times Article on Park(ing) Day made much ado on the journalistic angle of conflict: white activists invading on predominantly Latino neighborhoods (which was largely true, but definitely not in the case of the Militant's park(s)); people in automobiles at odds with "park"-builders, etc.

But the media never reported the other stories: That the City of Los Angeles' Parking Enforcement did not cite any of the "park"-builders and in fact were keenly aware of the day's activities. Furthermore, according to an operative, one of the Parking Enforcement officers even said, "You oughtta do this twice a year!"

Movements usually start out small, awkwardly and with much criticism and derision. Park(ing) Day was no exception. But in the inevitably denser, more urban Los Angeles of tomorrow, planners and local governments will have to be more creative in re-defining the paradigm of public space. Granted, it probably won't come in the form of a parking space, but you just might be surprised.

Was it worth it? Hellyeah. And the Militant already has some plans for Park(ing) Day LA 2008.

I am glad for forward thinking Angelenos like yourself and the East Hollywood Neighborhood Council.

Anonymous: Thanks. The Militant, via his network of operatives, has heard a lot of good things about that group and will be following them with great interest.

I hear they're just a bunch of kids.

You enjoy talking to yourself, then? In the third person, no less.

Anonymous: And that is just one of the many things that make the Militant Angeleno unique among the cadre of cityblogs in Los Angeles. Thanks for reading!

Yuup. Those City bloggers. What a bunch of characters.

Wait.... you don't think anonymous is the (gasp) LA City Nerd in disguise!?