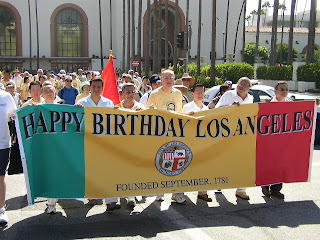 Every early September, to celebrate Los Angeles' birthday, several hundred Southern Californians walk nine miles from Mission San Gabriel to El Pueblo (Olvera Street) to re-trace the steps of the 44 Pobladores who were sent to establish a wee little village along a river.

The Militant has a reputation to uphold, after all, so he can think of nothing more to express his militancy than to walk the walk to celebrate the 226th anniversary of the city's founding.

So he got his militant ass up Sunday morning at 5 a.m., hopped on the subway at 5:45 and got on a bus at El Pueblo at about 6 a.m., taking him to San Gabriel. 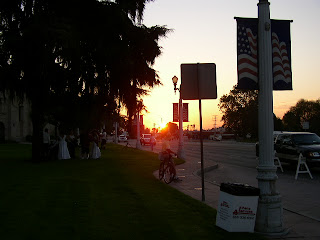 The world looks much different at dawn. There is no traffic. There is tranquility. And in this heatwave, the Militant savored the relatively cool weather as much as he could. Most of all, he saw something he only witnessed very few times in his life - a Southern California sunrise (pictured right).

Some 400 or so walkers, most adorned in the peach-colored t-shirts given away to them, loaded up on coffee, water, juice and pastries as local dignitaries such as San Gabriel Mayor Kevin Sawkins, Los Angeles City councilmen Eric Garcetti and Jose Huizar, County Supervisor Mike Antonovich and State Assemblyman Mike Eng emphasized the significance and symbolism of the voyage of Los Pobladores and Sunday morning's modern-day re-enactment. Their descendants, wearing red sashes and period garb, as well as others dressed as 18th century Spanish soldiers, were the people of the day. 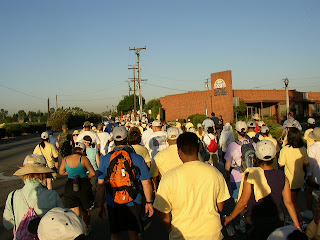 And we were off (pictured left).

With a brisk pace, the pack headed west on Mission to the city of Alhambra along a mostly-residential neighborhood save for the large ditch alongside the road that serves as a conduit for Union Pacific container trains. Even at 8 a.m. the air was muggy, the sun only barely starting to wield its power. The public speakers earlier on mentioned how the Pobladores didn't have the paved roads we have, and perhaps had other dangers like wild rattlesnakes, coyotes and bears (oh my). But then the Pobladores most likely didn't have to be there by 10:30 for a fanfare-filled ceremony with local TV news cameras waiting for them. The Militant is sure they took their own sweet time to get to the river back then. 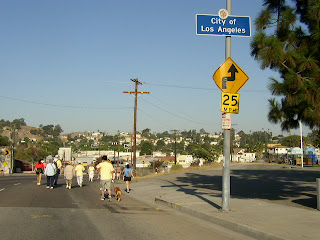 Nearing the halfway mark, the walkers, now starting to thin out from the dense mass into a longer line of varying paces, arrived at Los Angeles city limits (pictured right) in El Sereno, and the San Gabriel and Alhambra police officers who escorted the pack on cruiser, motorcycle and bike handed it all off to their LAPD counterparts.

The neighborhoods through this part of town were largely industrially-zoned, straddling a railroad yard (the entire route seemed to be no more than 50 yards from a railroad track), filled with auto repair/body shops, many with the carcasses of cars on display behind their gates. There were even trucks covered with graffiti tags and the random encampment of the motor-homeless, parked in vans and RVs along the street. It was also here the stretched-out pack moved from the street to the sidewalk, and instinctively along the south side of the street where the buildings provided a much-needed cover of shade. But walking these streets provided a closer glimpse into what's really here -- children and families living in nearby homes and apartments, the chirping of caged birds hidden behind a large roll-down door of a body shop, perhaps there to add a semblance of nature and tranquility into an otherwise dark and greasy confine.

As the pack approached the City Terrace area, the Downtown skyline was clear in view, a visual symbol of our destination, both in terms of distance and history. The Militant chatted with fellow walkers, most of whom happened to hail from the SGV but had done the walk at least once before. Many of them were well familiar with Los Angeles history and politics (eventually the topic landed on the world (wide web)-famous TMZ video of da Mayor and Mirthala caught in the act (of shopping) - don't ask the Militant how).

Though the Militant felt pain from head to toe -- the oppressive heat (still nothing compared to the oppression of the East Coast media powers) and the onset of blisters in his shoes, respectively -- the walk was still a rare opportunity, a feat to accomplish and a historical treat.
The group took a brief pit stop at Linkin, er, Lincoln Park, next to El Parque de Mexico which pays homage to the heroes of Mexican independence. Once the walkers approached "Windshield Row" at Mission St. and Cesar E. Chavez Ave -- we were in the home stretch. 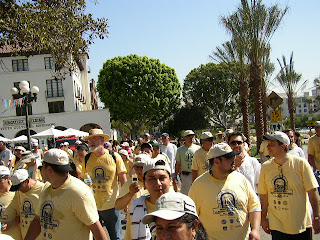 The walkers grouped near Union Station, led by native dancers in Gabrielino Indian costume and crossed Alameda Street into the gazebo stage of la placita at El Pueblo State Historical Monument, where the walkers were treated to more speeches and the appearances of the walker dignitaries, Mayor Villar, Fox 11's Tony Valdez and Herbert Siguenza from Culture Clash. Even one of the Pobladores descendants - a woman by the name of Irene Sepulveda Hastings - yes that Sepulveda and that Hastings - wearing an 18th century- era dress - got to say a few words.

The walkers, mission accomplished, were treated to snacks, drinks and some Los Angeles birthday carrot cake. What a way to celebrate a city's birthday. The Militant can just picture those Pobladores look down from above with smiles on their faces...or maybe they're shaking their heads, saying how loco we are.

Yes, the Militant was tired, aching and was looking forward to a nice cold shower when he got back to his compound. But needless to say, he would do it all over again...

Some more pics from the walk and post-walk ceremony: 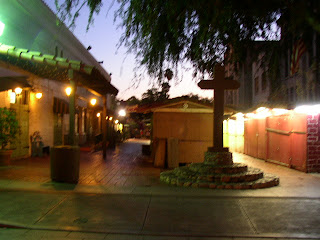 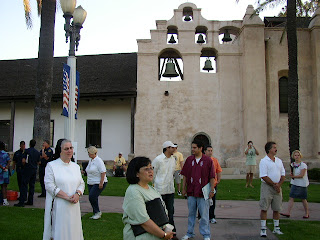 "...There she stood in the doorway/I heard the mission bell..." 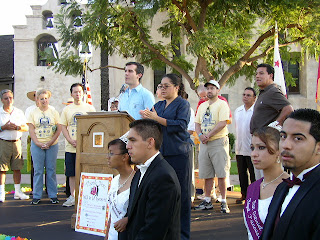 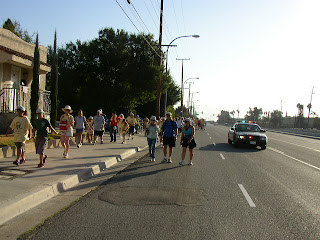 The walkers get a police escort via San Gabriel PD. 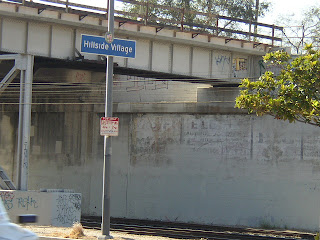 The Soto Street overpass in Hillside Village.
The bridge once carried the Big Red Car trolleys back in the day.
Look closely -- you can see the faded letters "PACIFIC ELECTRIC"
on the abutment directly to the right of the "No Parking" sign. 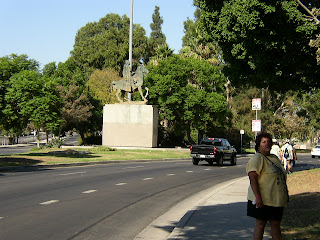 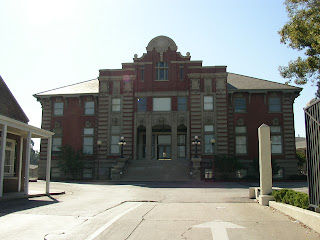 The County Coroner's Office in Boyle Heights.
Yep, if you're ever found dead somewhere,
this is where you're gonna end up. 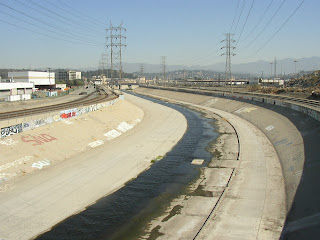 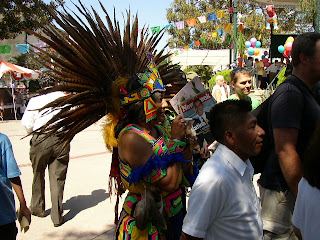 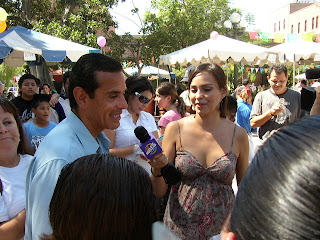 Da Mayor gets interviewed by an immensely hot reporter
from KRCA Canal 62
(if the Militant were the Mayor, he would dump Mirthala NOW).

Commandeered by Militant Angeleno @ 11:03 AM

Great job MA! I did the walk last year and it was a blast.

yes, the time and heat are two things that keep me away each year even though i long to go. i'm toying with the idea of doing the walk on my own sometime in the winter months.