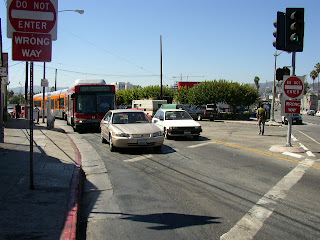 It all started when the Militant wanted to do a simple "Now and Then" comparison shot of Sanborn Junction (a.k.a. Sunset Junction; the former was what the Pacific Electric Railway actually called it). Unfortunately, after the Militant checked the "Now" picture taken on Monday, it didn't capture the same sort of perspective as the original. Perhaps, because he didn't have the original on him to compare it to. Duh.

So the next day, the Militant was ready, printout of the original pic in hand, the slightly crumpled paper folded in half, complete with web URL printed at the top of the page, flapping gently from the wind. But when it was time to take the picture, the little digital cam screen read: "NO CARD."

The Militant hates when that happens.

But suddenly he had an idea. So he returned to the compound, downloaded the original late 1940s-era picture and did some art magic. Some cardboard, some gluestick, some stapled yarn.

Later in the day, he makes the third attempt - proverbially, "the charm," correct? He snaps his "Now" picture, but notices an increased police car presence on the street. You know what the date is (The Militant is not a ter'rist). So he rides for a bit and ends up a little further down Sunset to make his return. Coast is clea...oops wait...okay, coast is clear now so he hangs the yarn on a protruding rusty nail that has probably been on the telephone pole when the wee Militant rode past the area on the RTD.

And there it is. A photo of the original, late 1940s junction with a Red Car in it. And a message inscribed, reading:

"Silver_Lake History Indicates the Presence of Streetcars" - complete with a quasi-subliminal message illustrated by the choice highlighting of certain letters in that sentence.

So there it is, on the northwest corner of Sunset and Sanborn, where Santa Monica boulevard ends its 14-mile journey from the sea: 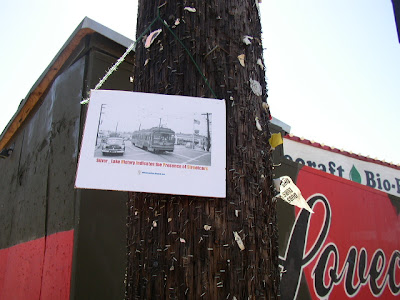 Stop by for a look, hopefully if it's still there.

That just makes me want to get some Jawa Juice at 4100. Wanna go after I finish my shift? Call me on my R2 unit of you get this in time.

At least some greenery has been added around the Jiffy Lube™ where the Standard station used to stand.

Did you, by any chance, ask the copyright holder of the 1951 photograph taken at Sanborn Junction for permission to publish it on your blog?

Someone please tell me raphael is kidding.

The Militant didn't get permission, as he found it on this page:

Which in itself doesn't give credit to the photo, or any other photos.

Since the Militant stands not to profit, this is fair use, but if indeed this "Raphael" is none other than Raphael Long himself, one of the great Red Car-ologists of our time, and can prove he took the photo, the Militant would gladly give him credit.

Yes I am Raphael F. Long who took that photo at Sanborn Junction back in 1951.