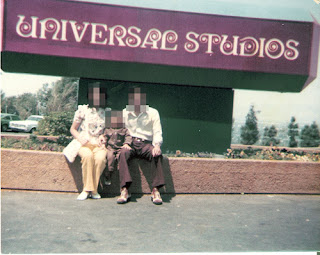 Today's "Go Retro" is Universal Studios. No, not today's Universal Studios Hollywood, but just plain Universal Studios (complete with groovy-looking purple sign in fancy script, pictured right), back when it was a one-of-a-kind theme park and studio. Designed to wow overseas as well as backwater American tourists who have never seen this "movie magic" thing before, the Militant found enjoyment in the park not at the tour, but at the tourist's reactions to the tour (i.e. people screaming at the latex Jaws head mounted on a track under the man-made lake).

Like many things, the rides and attractions have changed over the years. Gone are the vocoder-speaking OG Cylon Centurions who stand guard in front of the old Battlestar Galactica attraction, for example. More recently, the Back to the Future Ride has used up its last jigowatt, to be replaced by The Simpsons Ride by next Spring. 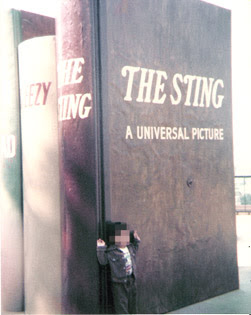 But back in the 70s, long before there was a CityWalk or an Amphitheater or even a Cineplex, it was just a studio and a theme park, damnit. Back then, during the midway point in your tour, the buses would make a pitstop and visitors could order overpriced food at a concession stand and pose for pictures by some oversized props to pay homage to the Studios' '50s-era film The Incredible Shrinking Man. Tourgoers once posed by a much-larger-than-life-sized telephone, camera, park bench, human hand holding lipstick (or was it a bullet ?) and a shelf of books, just like a where a young Militant (pictured left) once did.

Which brings to mind a closing thought -- are the attractions in Universal Studios (Hollywood, Florida, Japan, Uzbekistan, Antarctica or elsewhere) meant to celebrate and honor the Studios' work and legacy, or reflect (aside from a token Frankenstein or Feivel The Mouse walking around) the current pop culture?
Commandeered by Militant Angeleno @ 4:03 PM

I also remeber the displays where you would stick your face in the circle and become Red Sonja and Scarlett O'Hara. I have the pictures to prove it.

But hey Militant, at least some thing don't change. At least the giant fish hasn't gone bad yet!