Uprooted! (And The Far East Journey) 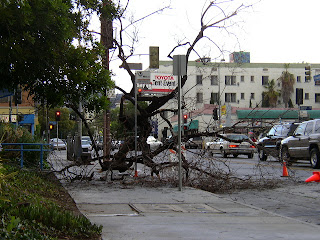 The Militant performed some operations of a classified nature in the Hollywood area on a rainy Saturday. No doubt, the much-anticipated downpour wreaked much meteorologically- related havoc on the city, such as an expected post-burn mudslide in Griffith Park. Likewise, the Militant, who just picked up a whole rotisserie chicken (con garlic paste goodness) on Saturday afternoon from the original Zankou was stumped to find more effects of the recent precipitation branch out into places he wouldn't normally bark at (pictured right). Yes, a tree went down at a Metro Local bus stop on Normandie Ave. at Sunset Blvd.

The Militant Ventures East of the 15 - STOP THE PRESSES!

The aforementioned chicken (and its accompanying immensely addictive trademark garlic paste) was purchased as a potluck item for a small party out in The Far East, a.k.a. the IE a.k.a. the Inland Empire, a.k.a the sticks. The Militant, who normally doesn't venture east of the 15, had to relent at least for this one day as a dude named Phil, a fellow member of a certain online forum the Militant frequents, invited some of his fellow Southern California-area forum denizens for a little party/BBQ at Phil's place in Glen Avon in Riverside County. Dreading a torrential trek in the rain (no, the Militant didn't bike there, LOL) and inevitable lane closures and sigalerts along the 60, it wasn't that bad and in fact not a drop of rain fell as he ventured way out east. 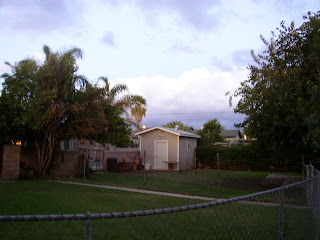 The party took place in Phil's backyard, which was a reasonably elongated piece of property in a humble neighborhood of single-story ranch-style homes, including a house next door (pictured left) that had horse stables (!) The normally hot and dusty nature of Riverside county was muted today by the recent rains and the cooler temperatures, which made for a pretty-looking sunset that illuminated the Martian-like hills nearby. Like the Militant's Chowhound meet adventure back in July this was a similar event where the Militant (known under a different name in this particular forum), exited the realm of virtual anonymity and entered the plane of visible, tangible existence. But unlike the July foodie meet, the Militant had no previously-known friends present and had to make some new ones there. He approached the host, who was gracious, hospitable and appreciative and before not too long met others who recognized his username.

Why all this trouble and a 55-mile trip to The Far East? Aside from natural curiosity, the Militant wanted to combat the effects of technology eroding healthy human contact and instead use technology as a means to forge friendships and relationships with other humans. It was a pleasant, jovial, drama-free affair (though not without offline gossip about a certain other forum user who possessed less-than-stellar interpersonal skills and was not welcome to the event).