Red Hot: The Militant can tell you things you don't know, or are not aware of, so he doesn't have to tell you it was freakin' hot on Labor Day Monday. Still aching from his Pobladores Walk, the Militant hobbled around town and spent a certain amount of time underground, where the air-conditioned confines of the (M) stations and trains were perhaps the coolest parts of town.

Red Cars: As the temperatures cooled down, the Militant trekked around town with an out-of-state operative visiting for the long weekend. The operative, who previously lived in the Valley for 25 years, was shown around the various changes to the city, from eating döner kebab at Eagle Rock's new Spitz eatery, to the new Downtown Ralphs to all the new condo developments in Downtown. 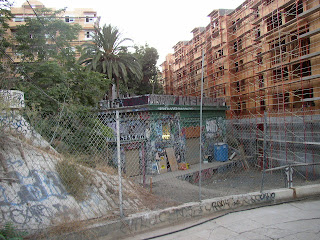 Speaking of developments, the Militant had to break the visiting operative some bad news: One of the operative's favorite sites in town, the abandoned Pacific Electric tunnel at Glendale and Beverly boulevards, is no longer in plain view, and is now obstructed by a large apartment complex (pictured left). The tunnel portal was obstructed by a foreman's trailer and other construction-related structures. The heavily-graffiti'd concrete structure was the Toluca Substation, which was an electric power conversion facility for the trolleys (Culver City's Ivy Substation, now a playhouse, was another one of these). This tunnel carried Pacific Electric Red Cars from Downtown Los Angeles' Subway Terminal Building on 4th and Hill streets (now refurbished as lofts) to the portal site, where the long-gone streetcars continued on to Santa Monica, Hollywood, the San Fernando Valley and Burbank from 1925 to 1955. The operative mentioned that he would like to move back to Los Angeles eventually. The Militant informed him that maybe he can live there right by the tunnel.

Red Line: The Militant and the operative also surveyed construction of the Eastside (M) Gold Line extension by following its route to East Los Angeles (in The Real Eastside) and caught a rare glimpse of (M) Red Line trains running out in the open, deadheading (moving without passengers) into the Santa Fe Yard and Shops near the Arts District, taken from the 1st Street Viaduct. Some YouTube goodness below:

Code Red: Though he cannot divulge the exact details, the Militant was tipped off by one of his operatives/militia members to a very grave Code Red security situation at the Great L.A. Ice Cream party in Heritage Square. Though the Militant cannot divulge the exact details, nor confirm whether or not he was actually there, and if he was, how long he was there, the situation was serious enough that it warranted calling in an unspecified number of operatives to the scene to thwart the security breach. The Militant will say that according to intelligence reports, the quick and evasive actions of the operatives proved largely successful in sealing the breach and that the Militant will quickly review and revise the current security protocol to ensure this type of incident will not happen again.

The Militant hopes you understand.
Commandeered by Militant Angeleno @ 1:20 AM

Militant, the more you go on about your secret identity, the more tempting it becomes for someone to try to figure it out. Assuming that's what your "Code Red" item was about. Hard to tell. Remember, people can resist anything but temptation.
Secretly,
M. B.

m. bouffant: You know, it's getting harder and harder to keep up this anonymity thing so I decided to reveal myself to the world once and for all. If you or anyone else want to find out who the real Militant Angeleno is, all you have to do is visit this link.

wait a minute, are you the hot blonde in the miniskirt or the redhead dude with only one dance move? sheesh, you make it so difficult sometimes!

should we ever meet i will hold that info in strictest confidence.

You are right in many aspects and so is Bouffant. I notice Afrida does junk car removal. We are the biggest junk car buyer in Orlando. If you need cash for a junk car or know anyone who does, please send them my way, if they live in Florida.

We specialize in paying cash for your junk cars and junk trucks. who buy junk cars

I like the way you shared your thoughts Write more, thats all I have to say. Literally, it seems as though you relied on the video to make your point, to clear it more increase the readability of blog.Regards car wreckers brisbane 😊