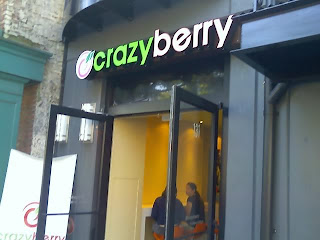 With all this talk of the impending expansion of the Pinkberry frozen yogurt empire both here in California and Out East, one would expect to see the chain (or one of its other So Cal-based competitors) pop up elsewhere.

One of the Militant's trusted Seattle-based operatives/militia members recently informed the Militant that in up the Emerald City, apparently they couldn't wait for all that, so they started their own.

The recently-relocated operative informed the Militant of the spotting of a new fro-yo store in his new Capitol Hill hood (apparently, the operative once described, the Seattle equivalent of Silver_Lake).

The Militant lapsed into LOL mode for at least a minute.

The operative also tipped the Militant off to a Seattle-based blog entry that described Seattleites' apparent "Pinkberry envy" (wait, don't those Washingtonians hate anything and everything that is California?) and mentioned yet another fro-yo ripoff: "Yoberry."
The Militant gets a kick out of all this, especially if and when P-berry moves into the Puget Sound region and enters a market already saturated with imitators, while Red Mango plays further damage control and pushes its "Originator" mantra even further.

According to a well-respected ice cream maker in Los Angeles who is also an operative of the Militant, these "Nonfat Italian frozen yogurt" chains are a joke, since the nightly cleaning and maintenance of the yogurt dispensing machines is extremely costly and labor-intensive (he told the Militant that it takes about an hour and a half each night to properly clean the machines) and that setting up shop in chic, high-lease areas will bite their asses in the end.

And besides, the ice cream maker operative quipped, "They don't even have that stuff in Italy."