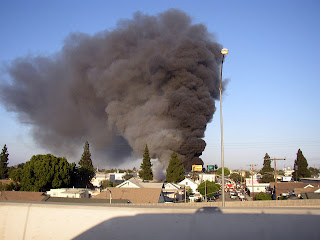 Terrorism? Plane crash? Tanker truck explosion? Like many in the Southland, the Militant saw a large, dark plume of smoke, stretching for miles, emanating off the side of the Harbor Freeway on Saturday evening. While heading back to his compound from San Pedro in a carpool with his operatives, the Militant, sitting in the rear passenger seat, was able to snap these pictures of the conflagration (pictured left) from the 110.. 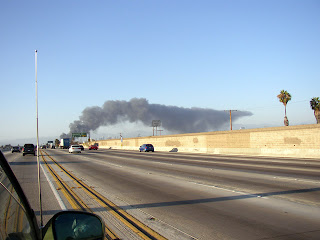 According to news reports, an 85-year old two story industrial building caught ablaze at the corner of 57th St. and South Broadway (near Slauson Ave.) in South Los Angeles, just a block east of the 110. The cause of the fire is still not yet known. Over 100 LAFD firefighters were on the scene to fight the blaze, which emitted a huge dark grey plume of smoke spreading for several miles eastward and was visible from nearly everywhere in the Los Angeles Basin (pictured right). The number of injuries and/or casualties from the fire is not yet known.

Militant Update: Flammable materials stored too close to fluorescent lighting fixtures started the fire in a carpet and tile store. The fire caused nearly $4 million in damages. Aside from non-life-threatening injuries to the carpet store owner, no one was hurt.
Commandeered by Militant Angeleno @ 6:51 PM

Thanks for your kind words, for capturing these images and for allowing us to share them on the LAFD News & Information blog.

We hope that your many readers will join us this month and throughout the year in preparing for disasters large and small.

Respectfully Yours in Safety and Service,

Way to go Militanto!! Putting your public service $$$ where your keyboard is.
Keep up the good work.

N, Bouffant: WHAT?!?! There's $$$ involved? Where is it, how much is there and where has it been all this time?