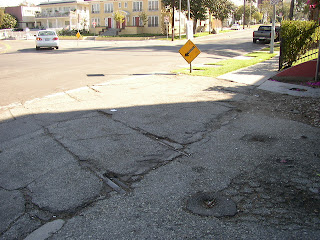 The Militant will admit something to you, the loyal MA reader. The Militant is a crack addict, and scours the city in search of crack. He knows where to find crack in many of our streets, yet is intensely intrigued when he hears of new places in which to find crack.

Okay, okay, not that kind of crack. The Militant is talking about...track crack -- the visible remnants of paved-over railway track, usually from Red Car or Yellow Car routes, which pop up out of the asphalt every so often.

The picture above shows one example of track crack at the corner of Heliotrope Drive and Rosewood Ave, in the far northern edge of Koreatown. At this corner, the sidewalk slopes down into street level where the tracks seemingly enter Rosewood Community Garden. There are actually two sets of tracks, with one set only faintly visible in front of the yellow arrow sign in the background. The garden was once the right-of-way for the H-line of the Los Angeles Railway Yellow Cars. The line ran from Melrose and Western, zig-zaging southeast towards the Westlake district, to Downtown and ending in South Los Angeles at the present-day intersection of Wall St. and Gage Ave. The unusual width of streets like Rampart Blvd. are attributed to the existence of this particular line.

Some track crack can only be seen come re-paving time, when the City of Los Angeles' Bureau of Street Services scrapes away the old asphalt and lays down a new layer. Streets like Pico Blvd. and 3rd St. still have the narrow three-and-a-half feet wide Yellow Car rails fully intact below the asphalt and are in full view during the resurfacing phase.

Other locations, like Monroe Street, just west of Vermont Ave., which cuts across Los Angeles City College still very much reveal some crack, this time belonging to the V-line of the Yellow Cars. The line's eventual conversion from rail to bus was obvious for years, as this end of the route was, until just recently, a layover zone for the Metro Local line 11 bus (which was canceled this past June).

Could some of this embedded track be used again? Perhaps. A group of people in the Angelino Heights neighborhood are vying to scrape off the pavement and resurrect a Yellow Car shuttle line along Edgeware Road. In fact, the group already owns an old streetcar, sitting in a neighborhood backyard, waiting for renovation and possible re-animation in the 21st century.
Commandeered by Militant Angeleno @ 1:25 AM

I thought I was the only one who finds submerged rails fascinating.

Me too. Uncover the tracks! Bring back the streetcars!

That would be amazing. But how feasible is that?

LA Bus Girl: Oh it's feasible, after all, the Port of Los Angeles was able to resurrect an old Red Car line in San Pedro a few years ago. The Angelino Heights proposal looks much more simpler. There are people around who know how the old trolleys are built, the only issue really is $$$, which is hard for the AH trolley supporters, since the San Pedro Red Car was built as a tourist attraction to get visitors from the cruise ship port into Downtown Pedro and Ports O'Call village. Angelino Heights, on the other hand, has barely any commercial areas.

I wondered why a part of Rosewood avenue West of Fairfax was narrower than an alley, but streetview clearly shows a curve at Sweetzer, where the narrow section ends, obviously was a single streetcar track. Haven't seen any of it exposed, but at Crescent Heights intersection you can see where they put an extra piece of concrete over the track.