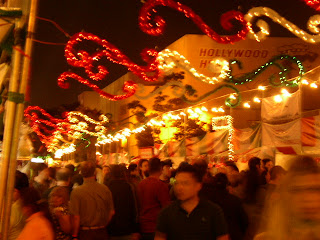 After being held captive for the past few years at Carusoville's Main Street, the 6th annual Italian Feast of San Gennaro returned to Hollywood this year and the Militant, accompanied by an unspecified number of Militant Operatives hopped on the (M) to check it out.

The feast event, started by comedian and talk show host Jimmy Kimmel (who is actually of Italian and German ancestry) is a smaller and much younger iteration of the one in NYC's Little Italy, which in itself is a smaller and much much younger iteration of the one in Naples, Italy, is a celebration of Italian culture, food and tradition (and not, as another local blog site calls it, a "Cheese Feast"). The feast, which is actually observed on September 19, honors the eponymous patron Saint of Naples, a third-century early Catholic martyr whose preserved dried blood is said to miraculously liquefy on the feast day.

On that note, let's get right to the food! There was a long row of food booths - all festooned with red, white and green banners -- set up on Hawthorne Avenue, just south of The Boulevard and west of Highland Avenue which had local vendors serving everything from the Militant's favorite pizza to the Militant's not-so-favorite pizza, gelato from Beverly Hills' Il Cono, cannoli (sponsored by the LAPD -- the Militant didn't forget the cannoli), biscotti, cappuccino, ravioli and some real buono Italian ices from Marrazito's in Santa Clarita. The Militant was in the mood for some mozzarella goodness that wasn't a pizza, so naturally he made a beeline towards the booth selling calzones -- but finding out, much to the Militant's chagrin -- that they had already run out.

The Militant and his operatives proceeded to raid the Precious Cheese sponsor tent which gave out free samples of salads, cheese slices and cheese spreads. Ultimately, the Militant settled on a vendor selling Italian sausage and pepper sandwiches -- but the bread had just run out, so he had to do with the sausage and peppers sandwich minus the "sandwich" aspect. Damn! Don't tease me bro!

Militant Operative Blackbird reported that many of the food lines were ridiculously long, so any of the shorter lines took first priority for us. Ironically for the Militant, the largely nonexistent Italian Ice line became the most rewarding food item at the festival. He might have to make a trek out to Santa Clarita sometime to add to his Ethnic Iced Dessert Quest reports. 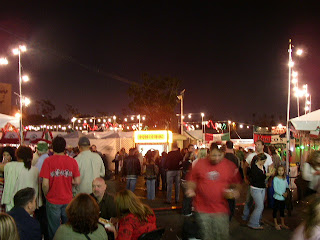 Elsewhere in the festival was a large bar area, a bingo tent, carnival rides, a midway with festival games and a huge entertainment stage which had singers perform primarily '40s-era swing music made popular by Italian American artists such as Frank Sinatra and Dean Martin. The main festival area, aside from the Hawthorne Avenue food tents and children's play area, was situated in a parking lot behind Disney's El Capitan Theatre and, not coincidentally, the theatre/studio next door which is home to Kimmel's ABC network late-night talk show.

The Militant, though, was pleased to see a little-noticed display of the history of Italian Americans in Los Angeles from the 1800s to today. It largely pointed out immigration by Italian region, the familiar Mediterranean climate of Southern California as a draw for Italians, settlements such as our old Little Italy north of Downtown and San Pedro, among others, famous Italian Angelenos (or, in the Italian context, Angelinos) such as Watts Towers creator Simon Rodia and painter Leo Politi, and even overlooked historical facts, such as how Italians found much in common culturally with the Latino community, and also how Italian Americans were ostracized nearly as much as Japanese Americans were during World War II and that Los Angeles is the fourth-largest Italian city in the United States. Though much more assimilated than today's Asian and Latino immigrants, the Italian American community, through its traits, arts and customs, offer somewhat of a glimpse into the future of today's immigrant groups. 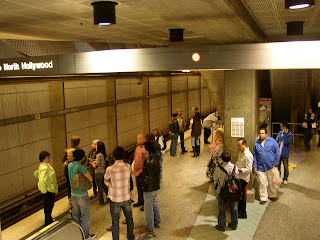 The Militant's journey to the festival on Saturday night proved to the Militant how much he takes the Hollywood area for granted. He got to hop onto a subway train, do some errands along the way, got back on the train to head to the festival and experience the vibrant pedestrian scene along The Boulevard. No parking, or wasting time hunting for parking, or even getting caught in the virtual parking lot that is The Boulevard. Meanwhile, others likewise took advantage of this enough that the Militant actually had to wait in line to buy his return Metro ticket and mix with a crowd of people waiting for the train at the Hollywood/Highland station platform (pictured right). The future is here already, and those suburban fools (who apparently have much disdain for a city they really have little real knowledge of) just don't know what they're missing. Ciao!

The Italian Feast of San Gennaro, located on Highland Ave at Hawthorne Blvd, continues until Sunday. Admission is $5.

Commandeered by Militant Angeleno @ 1:31 AM

Totally agree about the subway and the vibrancy of Hollywood. We hoppeed on at the Western/Hollywood station, waited 5 minutes for a train and when it came, it was jammed. After the bowl, we were planning on taking the subway back, but, well, we were a smidge tipsy from reveling with all of gay L.A. at the Rufus concert, that we hailed a cab. Yeah, I've seen the future and it is public transit and the future is here.