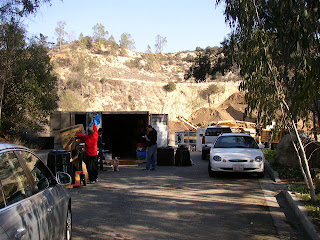 Readers familiar with Siel (no, not Seal), a.k.a. Green L.A. Girl have probably noticed that the Militant asked her for some advice a couple weeks ago on her L.A. Times Blog looking for a local source of a composter for the Militant's mama for a Christmas present (the Militant's mama, though aware of his various militant activities, is not actually aware he is the Militant Angeleno per se, (she is only aware he has some website where he writes about the City) nor does she read blogs, so the surprise aspect of this present is in no danger of being diminished.

Her reply directed the Militant to the Griffith Park Composting Education Facility (pictured right) where on Friday the Militant picked up a composter usually sold for $85 for a mere Andrew Jackson, thanks to a city subsidy. He also got a free pair of gloves and a miniature blue recycling bin (presumably used for storing pens and pencils on one's desk, or maybe a good accessory to a little girl's Eco-Conscious Barbie playset) thrown in.

They only do these sales events once a month, so you probably missed out on the one on the 14th (as well as possibly catching the Militant - one of the reasons why he did not announce this previously), but the Los Angeles City Bureau of Sanitation has a schedule online where you might be able to take advantage of these sales as part of your 2008 New Year's resolutions (which should also include walking, biking, taking transit, appreciating the people and cultures of this city more and getting more involved in your community, right?). 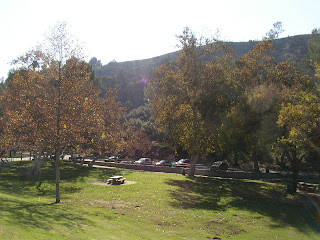 Being this was the first time the Militant has been in the park since some dude decided to take a nap smoking in the brush last May, he had a chance to survey the damage from a much-closer view. To his surprise it wasn't as charred out as he thought it would be (of course all that hydromulching back in September probably helped things out cosmetically), and his cherished section through Mineral Wells (pictured left) seemed untouched, though from the photo as you can see, the charred-out section is on the ridge on the top, while the intact portions are at the bottom. And oh lookie - some deciduous trees with brown autumnal leaves. And they say the seasons don't change here?
Commandeered by Militant Angeleno @ 1:36 AM

Glad I could save you a lil cash! Lemme know how yr mama's composting efforts go :)