Proud of Our Routes: The Vermont Bypass Bicycle Corridor

The Militant can just hear it now: The thunderous sound of non-bicyclists (velo-disadvantaged people?) clicking to another site since the Militant wrote yet another entry about bike rides again, ho hum. Meanwhile the choir of bike rider readers read on attentively with a chorus of "Amen!"s as Rev. Militant preaches to them the (already-familiar) two-wheeled gospel.

But hey, the Militant needed to get his bike on late Wednesday night as some inclement weather the next few days is gonna make it difficult, if not messy (note to self: riding one's bike during the first day of a rainstorm is not fun, especially since road gunk splatters all over oneself and leaves a skunk-stripe trail of gunk all over one's back when the journey's done).

So enjoying the cold night air while the sky was relatively cloudless, the Militant decided to discover a new bike-friendly route through town. Though he blogged about such a thing before, he realized that it's best to spotlight one corridor at a time, and perhaps share part of his Militant observations with the readers.

This route (full detail map at: http://www.gmap-pedometer.com/?r=1486983) is a 4+ mile, bike-friendly, traffic-light residential route which takes a cyclist from Los Feliz Blvd in the eponymously-named community down along Edgemont Street through East Hollywood via Heliotrope Drive and into Koreatown along New Hampshire Avenue with stoplights and 4-way stop intersections all the way until one is forced to stop for all them cars at Olympic Blvd.

So what to call this route? The Edgemont-Heliotrope-New Hampshire Bike Boulevard? Too long. The EHNH? Hunh? Well, since those three north-south streets are parallel to and not too far away from Vermont Avenue, the Militant dubs thee The Vermont Bypass Bicycle Corridor (VBBC).

Like many north-south routes, it takes you up and down the socioeconomic ladder, runs through several ethnic neighborhoods, various commercial corridors, an art park, a community college, a bike-friendly corner, an elementary school, houses of worship, theatres and art galleries, bars and nightspots, is close to four (M) subway stations and most importantly is a nice pathway to some of the best grub in town.

Starting at the north end in Los Feliz, along the cedar and pine tree-lined Los Feliz boulevard, Edgemont Street snakes slightly downhill through the well-manicured lawns and Mediterranean-style houses of the nearly- rich and almost-famous. Franklin Avenue (no, not that one) crosses your path and Los Feliz Village is just four short blocks to the east, so you can get your pie on, read a book, or have some mediocre Indian or diner food, among other things in this neighborhood. Look out for those hipsters though, you might run over one, lol.

Further down is Hollywood Blvd. and one can pedal up the hill to Barnsdall Art Park and catch a gallery exhibit or just enjoy the view of Hollywood and the Westside. Hungry? You're in the right place. This is East Hollywood after all, so some great Armenian and Thai restaurants can be found just to the west along The Boulevard.

Next is Sunset Blvd. Though the Militant promotes bike safety at all times, if, heaven forbid, you do get into an accident here, you're in the best place. Three major medical centers are nearby. The Vermont/Sunset Red Line station is just blocks away as well.

Heading down Edgemont, you're only a couple blocks from the expensive-but-tasty Square One Dining. Next is a quiet street named Lexington Avenue. Don't tell anyone, but if you head east on this road and make a left on Bates Avenue, you'll find a nice, quiet, bike-friendly path that leads you directly into the Sunset Blvd Bike Lane which takes you to Silver_Lake, Echo Park and Downtown.

At Santa Monica Blvd, you're in the heart of Little Armenia. The Zagat-rated Marouch restaurant is here, as well as some great Armenian markets and bakeries. There's also some central American restaurants and bakeries nearby as well, and the Vermont/Santa Monica (M) station, along with the legendary 24-hour El Gran Burrito are just a few blocks to the east. And if you gotta go, there's a Metro Toilet right on the corner (it might be operational now...)

Heading down Edgemont, one can head west one block and get onto Heliotrope Drive at any of the cross streets. Los Angeles City College is here, and down at the corner by Melrose Ave. is the hip and hot corner of Hel-Mel, where one can get the latest Scoop, drink a pint or eat some vegan chow, buy a bike or get one fixed. And there's tons of bike parking horseshoes on the sidewalk as well. There's also an art gallery and a live theatre nearby. And if you got invited to a quinceañera in the area, chances are it's right here...in a Ukrainian Cultural Center.

Gettin' Down in Koreatown 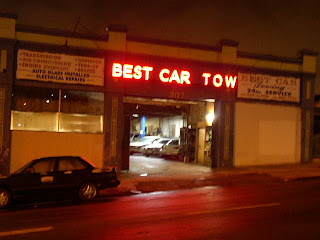 Past the 101, as the houses give way to denser apartment complexes and multi-family dwellings, right at Rosewood is the community garden where the Militant once wrote about his professed crack addition. Head left on Oakwood where you'll encounter a slight hill and jog right on New Hampshire. At Beverly is another subway station, plus a certain eatery that's abuzz with Filipino fast food. Biking down this corridor at around midnight, he discovered that not every business is closed this time of night (pictured left) as a towing company takes care of scofflaw automobiles for the night (and maybe not coincidentally, just minutes after taking this picture, a white Parking Enforcement car rolls by - of no concern to the Militant at the moment, of course).

South of Beverly, the street, along with others parallel to it in this section of town, is lined with towering Mexican fan palm trees. This corridor is a quiet, welcome hush just a block away from the bright lights and heavy multi-vehicular traffic of Vermont. At 1st Street is a bright yellow schoolhouse where the Militant had coffee with his congressman a few months ago. After 1st street is 2nd and 3rd street (duh), and after that is the popular 4th Street Bicycle Boulevard
(but how can a "street" be a "boulevard," the Militant asks?) which takes cyclists all the way west in a similar uninterrupted fashion to Park La Brea.

At 6th Street, lots of Korean cafes, soju bars and even an iced dessert quest stop can be found within just a few blocks. And yes, you can has frozen yogurt near here as well. 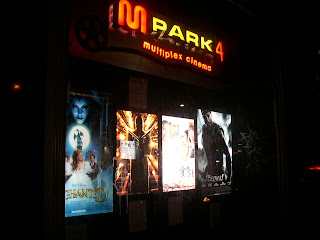 Bustling Wilshire Blvd, even at this time of night, shines bright, with the former Bullocks Wilshire building looming like a proud beacon just a few blocks east. There's a Red/Purple Line station to the next block as well as a well-publicized big-ass transit oriented development right above it. Not far is a couple of pirate-themed bars like the Viking and the Crazy Hook, and there's even a movie theater at New Hampshire and Vermont showing both mainstream American as well as Korean flicks (pictured right). Even one of the 2008 presidential hopefuls has set up his Los Angeles campaign office just a couple blocks away.

Past Wilshire, New Hampshire becomes somewhat dark and spooky, with a brief jog at San Marino Street. But the lights return once Olympic is in view and a stop sign at the intersection signals the end of the party, where cyclists are forced to stop here and either wait for traffic to pass or venture east or west along Olympic. But at least here one can try the best Dol Sot Bibimbap in town or get their 24-hour Korean food on just around the corner or find the electronics parts that Radio Shack lacks these days without going to the Valley.

Damn, this is one long post. According to the maps, this stretch of New Hampshire goes all the way down to Washington Blvd, but that'll have to wait for another Militant adventure. Must...click on..."Publish Post"...now...
Commandeered by Militant Angeleno @ 1:41 AM

I'm kind of ashamed to say this....but I never knew there was such a thing as East Hollywood! Am I totally out of the loop? Is this a new neighborhood designation, or has it always been there?

Awesome post. I learned about Edgemont about a year ago, and then the Helitrope-to-New Hamphire stretch for a friend's birthday ride, but never had reason to put the two together!

The Vermont Bypass route is a great one - I use Edgemont frequently to get from Los Feliz to the Bike Kitchen, and as Will said, Heliotrope to New Hampshire when I need to go farther.

Has the Militant thought of submitting this to C.I.C.L.E.'s bike route page?

thanks for connecting the final dots....and for keeping the 4th Street Bike Boulevard dream alive!!

By the way, a "street" can be a "boulevard" by adding the word "bike" in front of "boulevard" and also adding all sorts of lovely design elements (traffic circles, bollards, diverters, forced turns, bike only access...etc)

hence making it a "bike boulevard"