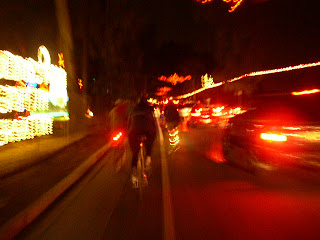 The Militant joined over 50 bicyclists who gathered at the Kool-Aid Fountain and headed down Crystal Springs Drive to the bikes-not-allowed DWP Holiday Light Festival and invade it as a show of protest against velo-oppression and utter disregard for vehicle codes.

We rode through the park, pedaling past the long, red-light-stringed queue of cars, with one of the members of the pack pumping out heavy metal Christmas carols from his portable sound system, ready to Stick It To The Man. Grrrrrr!

...well, "the man" just pretty much stood there, and didn't really care. The pack weaved in between and to the left of traffic. The organizers encouraged us to adorn ourselves - and our bikes - with lights, preferably of bright, colorful and flashing variety, and we also whooped, hollered and chanted, "Ho Ho Ho!" at the motorists, who honked at us - not out of scorn, but out of admiration - they too whooped and hollered along with us.

That didn't work out the way it was planned. So at the Los Angeles Zoo parking lot, the pack regrouped and took a break (which the Militant welcomed as it allowed his nearly-frostbitten fingers to regain sensation and bloodflow), then rode back the opposite way. We're riding against the flow of traffic! That oughtta get us into trouble, no question! 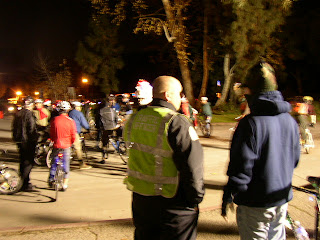 Uh, maybe not. There was even a traffic officer at the Zoo parking lot (pictured left) who just stood there and even chatted with other cyclists. And when we did ride against the flow of traffic, that just gave the motorists a better view of us - and us of them - and their visual and audible demonstrations of Holiday cheer.

Obviously the bike ban was not enforced at all (not that the Militant is complaining), but perhaps the real test is whether or not the velo-prohibition (on paper, at least) will still be in effect for next year's festival.

We regrouped again, just outside the Festival's entrance, and the group dispersed, most of them joining the Sins and Sprockets ride to Chinatown, and the rest headed home...in the fros-ty air!

So take your pick, this act of defiance was either a dud, or the Christmas spirit in everyone filled the place with peace and joy where everyone had a good time, no matter what mode of transportation they used to get to the Festival.
Commandeered by Militant Angeleno @ 2:50 AM

I'm glad the Militant could make it out last night. I have to admit that there was a smaaaaall part of the agitator in me that was hoping us festival ridazz last night would encounter some form of resistance -- nothing extreme, like tasers or handcuffs, but at least someone holding up a hand and calling out "HALT!" that we could blatantly ignore. So from that aspect it was definitely a dud. But from a cooperative and festive angle it was a total blast.

My favorite moment was splitting the gridlocked lanes going in behind ridah Digablesoul with his sound system blasting Twisted Sister's version of "Oh Come All Ye Faithful!" Fuck yeah!

And afterwards rolling to the Sins 'N Sprockets ride (which took its large group south to Slauson and Soto then east to Washington and Eastern before heading back downtown) was an awesome excursion as well. But a co-co-co cold one.

the militant beat me to this blog. I was pretty much going to say the same thing.

Based on what I saw last night though, I am going to be commuting through the park on my ride home from Burbank. There is absolutely no "safety" reason for me not to. Will have a report on the 'ol blog.

I visited your blog, You have made a nice blog...

Have you heard that song "Kill Your Employer" by Busdriver? That's what the angry cyclist scene is.

Joy in warcraft leveling living comes wow lvl from having wow lvl fine emotions,wow power level trusting them,power leveling giving them power leveling the freedom of wrath of the lich king power leveling a bird in the open.wlk power leveling Joy in living can age of conan gold never be assumed as a pose,or put on from guildwars gold the outside as a mask. People who have this joy don not need maple story mesos to talk about it; they radiate it. wow gold They just live out their joy and let wow power leveling it splash its sunlight and glow into other lives as naturally as bird sings.