Downtown On The Last Day Of The Year 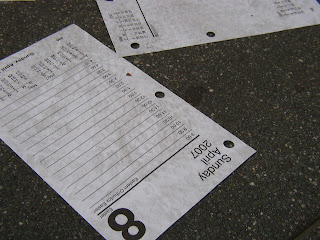 There's a long-standing tradition in Downtown Los Angeles that on December 31, office workers would dump the pages of their daily desk calendars onto the streets, a ritual symbolizing an "out-with-the old" cleansing of sorts (though an even bigger cleansing job for the Downtown BID cleanup crews).

The Militant wanted to capture this phenomena, so he hopped on the subway today to check out all the action, albeit with that voice inside of him reminding the Militant that in this age of PCs, laptops, Treos and Blackberries, people hardly use daily desk calendars anymore (that same voice is also the one that usually speaks when statements on this blog are enclosed in parenthesis).

As the Militant emerged from the 7th St/Metro Center station, he figured that voice was correct after all. The streets of Downtown were pretty much clean. But he wanted to take a longer walk to find more. Obviously in the Financial District, none of the highrises there have any windows that can be opened, so perhaps near the mid-rise structures can these discarded calendar pages be found. So from Flower Street, he rounded the corner from the Central Library and headed east on 5th, past the Pershing Square ice rink. 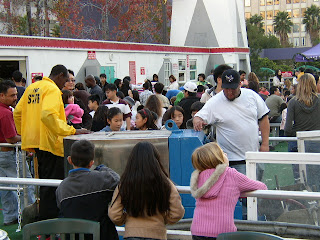 Children waiting to get on the ice at Pershing Square are fascinated by the Zamboni.
Now of course everyone knows that the old early-20th century Downtown office buildings are all loft apartments now, and the people who live there would obviously have more sense than to dump stuff onto the street (Especially since they pay mucho dinero to live there in the first place).

But still, the Militant, always wanting to make lemonade out of lemons, wanted to see some more of the ongoing adaptive reuse going on in DTLA. After all, it's been a long while since he's walked the streets of this part of Downtown.

He did get to see the sparking new Rite Aid on 5th and Broadway, which seemed rather out of place there, but hey, that's progress for ya. He continued on to Spring and took a right. The seemingly renovated sky-lit ground-level shops of the Spring St. Arcade Building (no, not that kind of arcade) was something the Militant had seemingly overlooked all these years. At least this time around, he did stop periodically and look at all those early 20th century 13-stories-and under wrought-iron buildings and appreciated their individual character.

He went further south on Spring then back west on 7th, passing by the new-fangled urban 7-Eleven that opened recently. He then found his way on to Olive St, and decided to pass by the much-celebrated Downtown Ralphs for good measure as the sky turned orange for the last sunset of 2007. 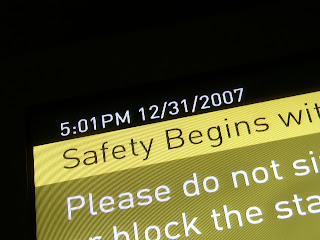 He realized though that all of these calendar pages were all found in the same location - around the vicinity of Macy's Plaza - and judging by their sheer volume (or lack thereof, rather), it's quite likely that they came from the same person's desk. And to make things even stranger, some of the calendar pages had a 2008 date on them(!). Oh well, beggars can't be choosers. Guess that just goes to show, if you keep looking, you'll eventually find what you've been searching for.

That, and at least one person out there decided to keep up with a dying tradition on the streets of Downtown Los Angeles.
Commandeered by Militant Angeleno @ 5:28 PM

I used to love the confetti of calendar pages that would fill the streets of Downtown Los Angeles. It was really cool, kinda like a ticker-tape parade. The streets filled with tons of old calendar pages really got me in the mood to celebrate while I waited for an RTD bus to take me and my teenage friends to some far off New Year's Eve party.
Thanks for the nostalgic reference!

great post! i didn't know of this tradition. i felt you were channeling huell howser here.