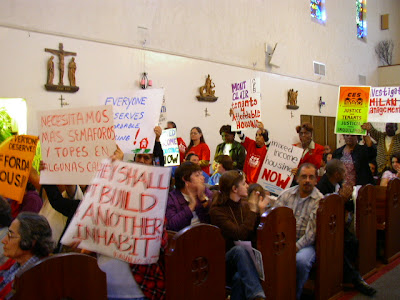 Your Friendly Neighborhood Militant has been extremely busy with both his Militant and extramilitant activities these past few days, making the blogging chore, er, responsibility a slightly lower priority as of late. But fear not, Militant readers, there's a huge backlog of stuff waiting to be committed to the Compose Window...

The Militant has partially disclosed to you readers that he has an unspecified connection to the community of Mid-City, semi-specifically in a neighborhood within a one-mile radius of the Adams Blvd and La Brea Avenue intersection (which happens to have an oft-overlooked war monument that might sound familiar to you readers). Because of the Militant and extramilitant activities he conducts there frequently, he was asked to attend a community action meeting in that area on Sunday that addressed a couple pressing needs in that low-income community.

While the rest of the local mainstream and online media seems fixated on some strike (Militant Say piss off both the writers and producers alike: Fileshare and pirate your TV programs!), there are people who are finding it increasingly impossible to live in affordable dwellings, and the youth who live in those communities lack very many choices. 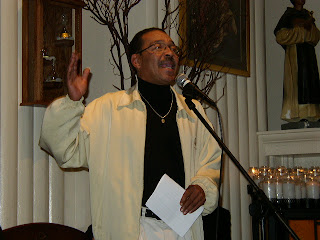 And so was the focus of Sunday's meeting at St. Agatha's Catholic Church organized by LA Voice PICO, a (inter-)faith-based grassroots organization that seeks to empower communities with regard to social justice issues. Nearly five hundred community members, including representatives of labor unions, fellow community coalitions and nearby various Christian congregations as well as an Islamic mosque, many holding up signs pertaining to the affordable housing crisis, filled the church's pews to have their voices heard by 10th District Los Angeles City Councilman Herb Wesson (pictured left). The organizers also invited Mercedes Marquez, General Manager of the Los Angeles City Housing Department and LAPD Southwest Division Captain James Craig, all of whom were in attendance (and so were KABC 7 and KMEX 34 news cameras, their presence no doubt sealed the councilman's commitment to attend).

Representatives of the predominantly Latino, historically African American community made presentations about the need for a local youth center and more parks and recreation space (a familiar topic to the Militant) as well as for the need for more affordable housing units in the area. Others were tapped to deliver personal testimonies, including a woman who had to rent a $200-a-month room for her family at someone's house as she could not afford the rent of nearby apartments on an $800-a-month income with considerable health care needs taking up a chunk of her budget as well. A local youth with collegiate aspirations lamented the number of activity choices for people in his age bracket in the community. PowerPoint slides projected various statistics, including that of the 14,000 new housing units built in Los Angeles in 2006, 13,000 of them went to people with an income of more than $135,000 a year.

The Councilman was also called to sign LA Voice PICO's Housing Pledge which calls on the Los Angeles City Councilmembers to support not only more affordable housing, but a citywide mixed-income housing policy, a Housing Trust Fund and tenants' rights education. A three-foot-wide display already bearing the signatures of Eric Garcetti and Jan Perry was waiting for Herb Wesson's name to be added. 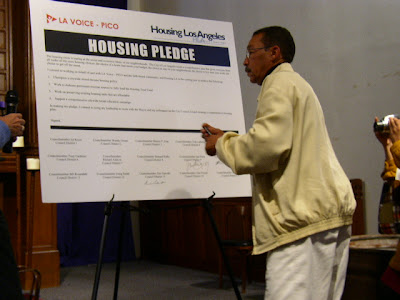 "Give me a pen!" responded the councilman, when asked to sign the pledge (pictured above). The roar of cheers and applause followed his imprimatur.

Of course, a politician's support of the faith-based coalition's pledge is likewise an act of faith - only time will tell whether Wesson - as well as his fellow councilmembers - will follow through with their promises.
Commandeered by Militant Angeleno @ 2:09 AM

There are some nice developers and some developers that cater to the richer segment. The developer of the Orcini developement converted business areas into "mixed" use but we may never see business that were displaced returning. You shouldn't develope just housing without the businesses...

The idea to have mixed income groups living together encourages the poor to do better, or maybe the moderately wealthy to do worse. Affordable housing is a harder dream to achieve when building codes get harder and harder to achieve at lower costs.