The Tannenbaum In Tinseltown - A Militant's Christmas Story

Gather around, kids, the Militant has a Christmas story!

Once upon a time, one mid-December day in the City of the Angels, the Militant Angeleno walked out onto his rain-dampened driveway and fretted, "Five days until Christmas, and there is still no tree in the compound. What ever shall a Militant do?"

So the Militant set out on that Thursday evening looking for a nice local Christmas tree lot, as he wanted to save on carriage fuel, not contribute to carriage traffic and support his neighborhood's economy in his tree-shopping trek.

But alas, all of the lots he was accustomed to in years past were no more! They had all been developed and there was no more space for seasonal tree lots. So the Militant, though wanting to buy local, was forced to drive a little farther.

He eventually hit the town of Glen Dale and saw a Christmas tree lot in front of Ye Home Despot on St. Ferdinand's road, but. to his dismay, the fence was closed - there were no more trees!

Chagrined, he drove back on St. Ferdinand's Road and headed the opposite direction, eventually finding himself in the Park of Glassell, still with no tree lots in sight. Then he arrived in the land of Silver's Lake, where he found a string of yuletide beacons announcing the presence of a tree lot!

This one was run by the Delancey Street Foundation, and the proceeds of the tree sales would go to helping out those in need, what a great gesture for the Season. The Militant found a stately Douglas Fir, standing about six and a half feet high. He looked at the price tag: "$71."

"Seventy-One silver coins?!?!?" the Militant thought, stunned. "Only the wealthy can afford to support such a cause! The Militant does not hesitate to help the needy, but the Militant is needy himself!"

He left the land of Silver's Lake and headed west, arriving at The Marketplace of Jonathan, located at the foot of Olive Hill upon which stood the House of Hollyhock. The Marketplace of Jonathan also had a small lot of trees, which the Militant perused. But the selection was rather paltry, and many a tree stood at an awkward angle. "Not good enough!" said the Militant.

So he once again hopped into his horseless carriage and headed west along the Boulevard of the Setting Sun, where he knew of another location of Ye Home Despot which might yield some yuletide arbor. 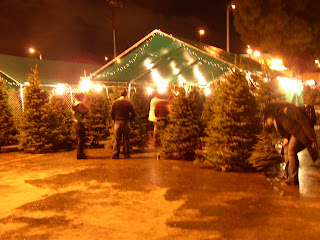 When what do his wondering eyes did appear, right on the corner of Boulevard of the Setting Sun and St. Andrew's Place, across the street from Ye Home Despot, in a plaza bearing a Ranch marketplace, the Three Latin Brothers' haberdashery and the Consumer Value Stores apothecary - was a considerably-sized tree lot! (pictured right) And one with an abundant selection, of various varieties and heights, all of seemingly good quality!

The Militant turned and saw a beautiful bright-green Noble Fir, standing stately in the lot. The Militant fell in tree love, he almost wanted to hug it. She was perfect! The Militant asked the lot's merchant how much silver coins the tree would cost him.

"Fifty silver coins...and these are forty-five..."

But the Militant asked the merchant what warranted the five-silver-coin difference between the trees, as they were of equivalent height. The merchant consulted one of his superiors, who explained that all of them in that row cost forty-five silver coins each.

"The Militant will take it!" he told the merchant, pointing to the love-at-first-sight Noble Fir beauty he first laid his eyes upon.

The Militant laid a tarpaulin atop his carriage and the merchant hoisted and secured the tree to the vehicle. After the monetary transaction, the Militant carefully drove his new acquisition home, to be festooned with ornaments in time for the Holidays.

Yes, the Militant bought his tannenbaum in the town of tinsel, which was but a short distance from his compound. But when all was said and done, he had traversed some 20 miles in his quest for this one tree.

The moral of the story: Get to know one's vicinity - even if you already think you do. It may just save you the inconvenience.

The End.
Commandeered by Militant Angeleno @ 12:03 AM

Such a great story, and told with such panache. I love the street names.