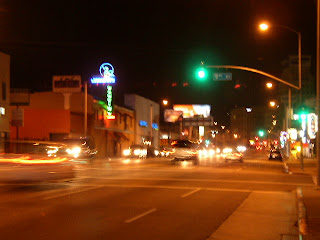 The Militant took another 15-mile round trip ride from his compound to the Mid-City area and back. This time in the name of expediency, and to thwart those who might be staking out the previous week's route in hope of accosting and possibly unmasking the Militant, yours truly took an slightly different route, this time through an unspecified major thoroughfare, then down Western Avenue, west along Wilshire and down Crenshaw Blvd to Adams and then west for an unspecified distance. This time, it took about 40 minutes - not too shabby.

Before leaving his destination later on, people there still offered to give him a lift:

Person 1: Are you sure you don't want a ride?

The Militant: That's cool. But it would defeat the purpose of biking.

Person 1: Well you be careful out there!

The Militant: Hey, The Militant did it last week and you're still talking to him today!

Person 2: Well you sounded like you had a lot of fun on the ride over here!

Person 1: Uh, [NAME WITHHELD] why do you keep referring to yourself as "The Militant?"

The Militant: Oh, um, uh, did the M...uh, did I...uh, was that what you heard? Oh um, no, what was said was, "The Milton!" As in Milton Bradley! Yeah, they make lots of great board games, ehh, heh heh heh (nervous laughter trailing off as Person 1 has a perplexed look on her face).

At any rate, the Militant was into some exploring on the ride back to his compound so he followed the advice of a certain two-wheeled blogger who recommended to the Militant last week that he use Redondo Blvd as a bike-friendly north-south route. The Militant wanted to try it out himself and was pleased. Light traffic, and a mix of traffic lights, 4-way stop intersections or 2-way stop intersections in the road's favor. The route was mostly flat save for a slight, but totally navigable incline north of Pico.

Speaking of Pico, the Militant also noticed a Jamaican restaurant and a reggae record shop near that intersection, which might be a likely candidate for a future Militant adventure, as well as the overall morphing of the socioeconomic from lower-income south with its duplexes, apartments and auto body/tire shops to upscale north with its abundance of tree cover and presence of Mediterranean-style houses. And Pico Blvd seemed to be more or less the dividing line here. 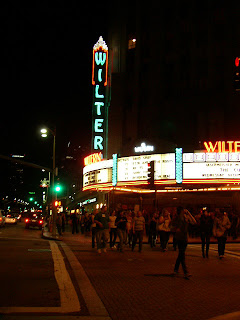 Redondo ended near the intersection of La Brea and Olympic, which took the Militant past of his workplaces on to Wilshire Blvd, where he veered east through Brookside/Hancock Park/Wilshire Park and on to K-Town, where he saw throngs of people pour out of the now-naming rights-free Wiltern Theatre (pictured right) who caught the Motion City Soundtrack concert there.

The Militant was supposed to head north on Western but, enjoying the ride and the urban amenities of Wilshire, decided to alter his route a bit.

When the Militant started on his trip back from Mid-City, he was shivering in the cold night air and hastily pedaled just so he can generate enough body heat to keep himself warm. But now on Wilshire, he somehow realized the cold air was suddenly gone and felt as warm as it was when he initially left the compound. Perhaps it was the whole urban heat island effect going on.

The Militant finally arrived at the compound nearly an hour after he left, but unlike the usual 25-minute car trip that he usually takes to and from Mid-City, he felt a sense of relieved accomplishment, not unlike scaling a mountain that can be ascended by other means. Why? Because it's (the route) is there. 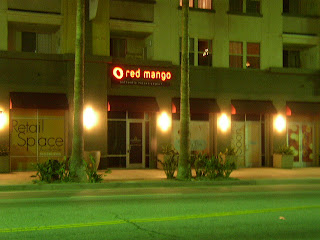 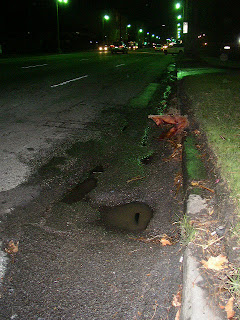 See? This is the kind of crap we gotta deal with all the time.
Commandeered by Militant Angeleno @ 2:12 AM

Congrats on another successful night excursion. Glad you found Redondo Blvd. a pleasant experience coming back. It's even better going southbound.

I can see why you think Pico Blvd. is a "Mason-Dixie Line" b/n rich and poor. It's remnants of old segregated LA (not to say that it's any different now). Older Blacks used to say they would never venture north of Pico for fear of harassment.