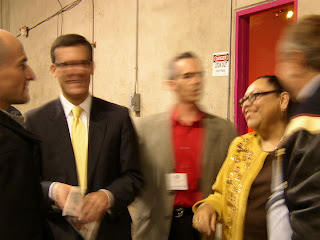 Being an active member of the urban Los Angeles community, the Militant may or may not have been invited to (or, in true Militant fashion, may or may not have crashed) Council President Eric Garcetti's (pictured left, forgive the blurriness) Annual Council District 13 Holiday Party on Thursday night at the L.A. Derby Dolls' roller rink located in a former dairy processing warehouse in Historic Filipinotown near Temple and Alvarado.

Nevertheless it was a fine reunion of sorts
with the various operatives and community leaders the Militant may or may not have worked with over the years, especially folks from the Hollywood, East Hollywood, Silver_Lake, Historic Filipinotown and Echo Park communities. The Militant also ran into operatives and associates who work for the councilman, as well as for City Hall and even had a chat with City Attorney Rocky Delgadillo, who, while meeting some neighborhood council folks, still somehow felt compelled to recite, by rote, the story of the origin of his name (his dad was a boxing fan, his mom decided to alter it to "Rockard," etc). But most importantly there was food, courtesy of the fine eateries from this diverse district, be it tamales, pad thai, lumpia, pizza, pita wraps and desserts galore.

The crowd of some 200 guests were entertained by a choir made up of of recovering substance abuse addicts who sang some lively Holiday favorites, kids from a local elementary school who sang and danced some Filipino Christmas carols, a drill team and finally (after moving the party to the bleachers in the adjacent area) an exhibition game from a pair of squads from the Derby Dolls, an all-female roller derby league. 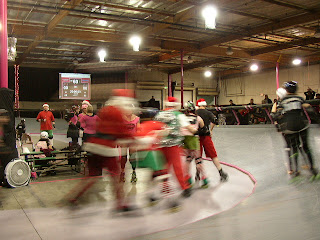 When the Militant first heard of such a thing, he instantly dismissed it as some lame gentrohipster pseudo-retro, reclaim-your-lost-childhood activity. But when the ladies started their game, the Militant saw a little neighborhood girl at the party run towards the bleachers, chanting, "Derby Dolls! Derby Dolls! Derby Dolls!" in excitement. So it was probably a cool thing after all for little girls to get excited about a sport that's not a mere adaptation of the games boys play. And after seeing a round and finally getting what the sport was about, he admits it can get kind of exciting after all. But maybe they should have some chola-types on skates too, that would make it even more bad-ass. The Militant recommends that the Derby Dolls themselves ask a chola how to get something like that going.

In all, it was a neat little night partying with familiar community folks as well as the elected official who may or may not be his councilman (if you're keeping track, the Militant also gives another local councilman some press in this here blog, so draw your own conclusions).
Commandeered by Militant Angeleno @ 1:18 AM

That's it..I'm not letting you wear my elf hat anymore.