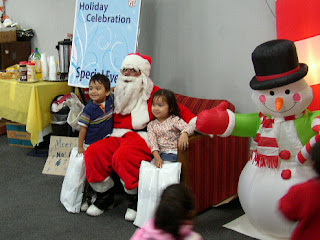 Over two hundred families and some 600 children were treated to toys, joy and a photo-op with Santa on Friday afternoon at the City-run Hollywood Youth and Family Center in East Hollywood during their annual Toy Giveaway. Toys donated by Aztecs Rising (an intervention program that turns gang members into firefighters), FilAm ARTS and the local neighborhood council, distributed by volunteers from the City and Los Angeles City College, brought smiles to the faces of the children, who came from low-income families in and around the area. Children's reading books were also given away as well.

The Militant and a few of his operatives were able to donate some toys earlier in the week, so the spirit of giving also gave a smile to this Militant's face (which normally either frowns or sneers). The center, which is run by the City's Community Development Department and also houses various community and non-profit groups, has been running the program for the past five years and the organizers were worried that some families might be turned away, empty-handed. But this time, there was an excess of toys.

In a season where Holiday travel stress and shopping materialism make headlines, it's nice to see some of the more simple pleasures of this city unfold in front of your eyes.
Commandeered by Militant Angeleno @ 1:45 AM

I know who you are militant. this blog give you away. I promise I won't tell.