Down To Earth In The Eastside 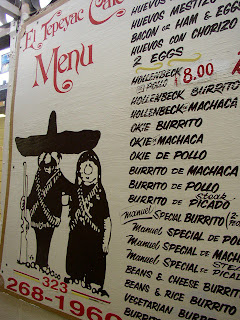 Militant Operative Valleypinoy, home for the Holidays and on vacation from his out-of-state militant training, gave the Militant a call on Wednesday and asked if he wanted to do lunch. When the Militant asked the operative what what he was craving, the top of the operative's list was Mexican food, which made the Militant LOL as quality comida is difficult, if not impossible, to find where the operative is currently based.

The Militant proposed the legendary (Real) Eastside institution, El Tepeyac Cafe, a favorite of the operative's and, admittedly, a place the Militant has long desired to go to but never had the chance, until this day.

After a quick subway ride to an unspecified location Downtown, the Militant hopped in the operative's borrowed car and crossed the river, traversing the rain-dampened hills and past Ciro's (where the Militant and two of his Militant Operatives had lunch once), past the grand old cemetery to an unassuming block of Evergreen Avenue, with a nearly-full parking lot. We had made it.

The restaurant's namesake refers to the hill in Mexico where it is believed this guy first saw this lady; a place where miracles happen. The Militant, too, sees little miracles happen here (not to mention it would take a miracle for a single human being to finish a Manuel Special Burrito).

The indoor seating area was to capacity, filled with locals, faithful patrons and city/county/federal workers, as Militant Operative Valleypinoy pointed out. But we managed to sit in the patio tables and order from the outside walk-up window, across from the large menu on the wall (pictured above). The staff was decidedly 'tude-free and a friendly Eastside local who was eating at the table nearest to the window was willing to describe what a "machaca" burrito (largely the addition of scrambled egg) had to offer.

The Militant, curious about the baseball cap the local gentleman was wearing as it bore the name of the Militant's unspecified LAUSD high school. The man just said, unabashedly, "I just picked it up at the 99 Cents store." No materialistic frontin' here. The Militant totally dug that. They continued to have a brief conversation about local high schools.

The Militant decided to get the flagship Hollenbeck burrito (named after the LAPD precinct which serves the area - um, was it any coincidence that it's full of...pork?), machaca version
while the operative treated himself to an Okie Machaca burrito. We also split a 1/2 guac and chips, which was a generous freaking mountain of avocado. We also were only successful at consuming half of our respective burritos.

Now the Militant could have included this in his spinoff food blog, The Militant Angeleno's Mess Hall (BZZZ! cheap plug alert!), but El Tep's ginormous burritos have been well-documented in several places. The Militant would have nothing new to say other than his experience eating at Manuel Rojas' half-century-old Eastside landmark confirmed to him that Eastsiders - the real ones from the real place - are perhaps the most friendliest, down-to-earth folks in Los Angeles. No wonder others, especially those from points west, give no regard to the land on the east bank of the river -- their personality flaws would be obvious by comparison. So may be it's in their best interest to cover it up, by not recognizing the Eastsiders' existence, and deriding them as "dirty, untrustworthy vato gangster types" when they do acknowledge Eastsiders, because the discovery of any sort of down-to-earth folk- especially if they're locals - would run contra to their entire paradigm of Los Angeles life.

The Militant and the operative, weighted down like an anchor by the sheer quantity of consumed food (but 'twas good though!) finally left the restaurant, styrofoam take-home boxes in hand, walking across the rain-soaked pavement as the roar of a low-flying Boeing 777 jet on its LAX approach echoed through the hills, the plane re-entering the visual veil of the grey clouds that drifted above. The Militant loves the post-rain period in the city; we're all wet, we're all equal if for just this moment.

Life in the Eastside is by no means perfect, of course, but the miracle of interacting with such real folk in this day and age is one that can't be ignored.
Commandeered by Militant Angeleno @ 1:52 AM

My grandparents used to live right around the corner from El Tepeyac on Blanchard. So many of my early childhood memories are anchored to that area. I was baptized in the church across the street, my parents got married (and met there), and I remember going with my mom several times to pick up a giant burrito to share with the family for lunch. I'd never eaten inside El Tepeyac until last year. It was weird.

Your loveable iaalmaf cyclists once had the great idea (OK, so it was my idea) to back to El Tep, eat and bike home.

Uh, stoopid much me?

I love the place but I was in pain pedaling back home after putting away their Hollenbeck burrito.

Gut busting burritos sighted again? Well it is not that rare, unfortunately some of the more finicky eaters just frown on bean eating....

Are you looking forward to the opening of the branch subway line to ELA college? I certainly will.

Just got a job working on the other side town (not the Eastside) and it's strange how foreign and "Eastside" I feel! I miss the casual friendliness of my neighborhood peeps.
Thanks again for reminding certain folks Los Angeles is home to more than their narrow stereotypes.