Of Life, Love and Property in Culver City Adjacent 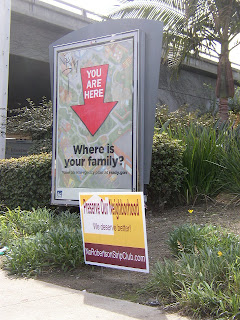 The Militant found himself entirely - save for an hour and a half in an unspecified area not so far away - in and around Culver City, for various purposes (thus cutting down unnecessary trips and saving gas)

Starting at noon he took one of his operatives, who was in the market for a condo, on an informal asset-mapping of the community she was considering moving to by taking a three-and-a-half-mile walk around. The Militant, notorious for being a multitasker, saw not only an opportunity to get to see (and write about) a community, but discovered an excuse to spend most of the day with her, as he has been pursuing her amorously (with various unspecified mixed signals) for an unspecified amount of time...which is actually quite a while, come to think of it.

The operative, which will be henceforth referred to as "A" (which may or may not be her first, middle or last initial, though the Militant is also comfortable knowing that she does not know he is the Militant, though there is a minute chance she might stumble on this here blog while doing more research on her potential community, but the Militant will take his chances lest he ends up professing his love to her through this here blog - regardless of the outcome, he would get quite a kick out of it, come to think of it), currently lives in a 562-area suburb, but was looking for a considerably more dynamic area and a closer commute to her Downtown job.

She told the Militant that the potential condo was located in Palms, but after Mapquesting it (So websites have become verbs now?) discovered that it wasn't really in Palms, but Palms-adjacent, specifically in the South Robertson neighborhood. He pointed her to the South Robertson Neighborhoods Council website for some community resources and while taking a glance on both sides of the cellphone signal, she read about the neighborhood's efforts to stop a strip club from opening near Venice and Robertson. As a potential property owner, she didn't think that was cool, and it added to her concerns about the neighborhood.

They convened at the condo just off of National on a beautiful, relatively warm late Fall Sunday afternoon and walked to nearby Hamilton High School where a parking lot full of cars got their attention and curiosity led them to a possible event on the campus, but alas it was simply just a weekend practice session for the school's basketball team in the gym.

They walked around the campus to Robertson, where she constantly commented how the nature of the streets dramatically changed from idyllic, quiet, tree-lined blocks to blighted areas
with graffiti tags, bulky items and badly-cracked pavement all within a small distance of one another.

They continued down Robertson, past the pair of gas stations on the street and crossed under the 10 Freeway to the other side, where by chance they found themselves across the street from ground zero in terms of neighborhood controversy - Skin Gentlemen's Club. The building surpisingly didn't look very assuming and we actually were more baffled by the lack of parking spaces it apparently had.

The two crossed Venice Blvd, where a pair of bicyclists rode westward. They passed an unspecified store (no, really, there was no signage, save for the words, "WHERE ONLY INTELLIGENT PEOPLE SHOP") which consisted of a shack which apparently sold miniature motor bikes in front and various trinkets inside. 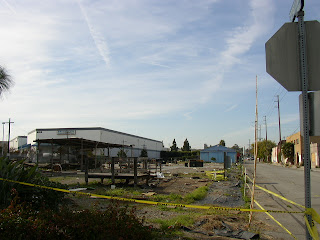 Walking down Exposition and now entering the City called Culver, with its green street signs, they saw a run-down, debris-strewn empty lot, bordered with yellow "police" tape, which would, in three years, become the western terminus of the (M) Exposition Light Rail Line. Even a banner for the former business - Jungle Tropical Plants - bore the establishment's newly-relocated address on Sawtelle Ave. The Militant reminded her that come 2010, she can simply hop on a train to her job in Downtown, and if she plans to sell her condo in the future, its access to a Metro station would be a huge selling point, in addition to its added value.

A series of boarded-up, graffiti-tagged buildings down on Washington Blvd which made up a former used car sales lot caught A's eye, as she wondered why this particular part appeared so run-down. The Militant explained the area was ripe for redevelopment and that the Metro station's presence would likely transform the area into something else entirely. 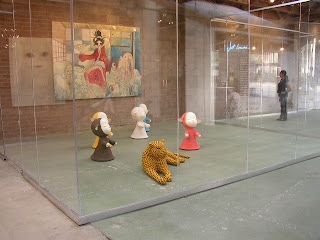 A few entrepreneurs seemed ready to ride that redevelopment tiger already, as just a few blocks west, we randomly stumbled on a curiously-chic looking space - the kind usually found in ethnic neighborhoods as a gentrohipster establishment - yet in this relatively barren quasi-industrial zone of Culver City, everything was fair game. So stood Royal/T, a mixed shop/art/cafe space (the latter wasn't exactly ready yet as the establishment was only a week or so old) built on the former corporate office space of Burke Williams Spas, which bore a contemporary Japanese theme in the form of manga book displays and wall-sized images of gaudily-dressed Fresh Fruit/Harajuku types. The gallery spaces (pictured left) bore an exhibition called Just Love Me, which, according to Royal/T's literature, "explores the complexity of cuteness." 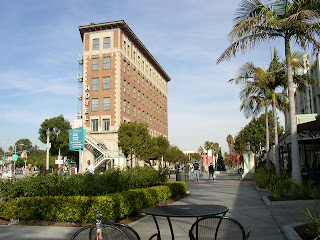 Speaking of cute, the quaint, colonialist facade of The Culver Studios stood just a short distance away, as well as the six-sided Culver Hotel (pictured right), where skateboarding teens rolled and jumped in the nearby plaza. Here in Downtown Culver City was were the urban experience was once had and is now found again in the form of entertainment, shops, bars and restaurants. A and the Militant took a break here on a sidewalk table to enjoy an unspecified dessert. She definitely likes this aspect of the neighborhood, though living on this side of the 10 Freeway was prohibitively more expensive for her.

We walked around Downtown Culver, right by the former Pacific Electric Red Car powerhouse known as Ivy Substation, home of The Actor's Gang. She also showed the Militant another potential condo property on a decidedly more quiet, tree-lined, naturally traffic-calmed street in Los Angeles city limits (where it's actually Palms) much closer to Venice, but the Militant warned her that it would have to come at a price. But if she were able to get a good deal on it, she should definitely consider that over the original property.

We headed back and though she got to know the neighborhood a lot more, she was still undecided, though did come to the impression that the strip club thing didn't seem like such a big deal anymore, but rather pedestrian access to Downtown Culver City, which was limited by a relatively unsightly freeway underpass.

She did tell the Militant that if she does live there, she would definitely get more involved in the community, which made the Militant smile for many reasons. Perhaps he can even help train her to be an actual Militant Angelena...sigh...

The rest of the afternoon was still spent in the area, where one of A's own operatives (she's quite Militant, or rather dedicated, in her own way in other unspecified volunteer activities) joined up at an unspecified sit-down restaurant further west towards Sepulveda. And later that evening, after A had to leave (and the Militant felt a little heartbroken), he joined up with a bunch of other operatives later that night indulging in food, drink, karaoke and more drinks at an establishment of that nature situated in a part of Palms that looked awfully familiar to the Militant.

If your adjacent property is about to undergo a major construction, hiring the services of a party wall surveyor would be a big help regarding those agreements.