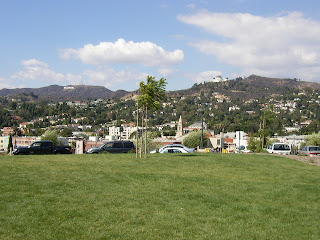 How time flies. Of course, this is a Southern California December and Monday's high was in the low 80s, so the Militant decided to walk his K-9 unit around the area on Monday afternoon and having been in a park-advocating mood in the past week, decided to visit one of the few parks within a 2-mile radius of his compound - Barnsdall Art Park.

Not only was this the first time he took his K-9 unit to the park, but this was the first time in a long-ass time the Militant visited the park for the specific purpose of enjoying it as a park. Sure he went there over the past few months to cover a Thai cultural festival, to try to understand the purpose and theme of the Swerve Festival and may or may nor have voted for his operatives at a recent neighborhood council election which took place there several weeks ago. But this time he just went there for no particular reason other than enjoying the park.

He took his K-9 unit on a long climb up the stairs in the park's southern entrance and even further up to the top of Olive Hill, where they went to the park's west-facing Great Lawn which afforded a killer view of the Hollywood Sign and Griffith Observatory to the north (pictured above -- pic is a file photo taken in September - lest you notice the absence of the currently-yellow hydromulched areas in thar hills - as the Militant neglected to take along the Militant Cam this time around).

The Great Lawn, whose renovation was completed this past Summer, furnished the neighborhood-jewel and Frank Lloyd Wright-designed Hollyhock House with a drought-resistant native plants (the Militant doesn't just give the native homo sapiens a voice, but the native flora as well) and a water-saving smart irrigation system for the green grassy area.

On the lawn, the Militant's K-9 unit ended up trying to socialize with another person's bulldog mix (of the opposite sex), with the two human leash-handlers exchanging humorous and sometimes apologetic comments regarding canine behavior as their respective pawed ones growled and barked at each other. The Militant's K-9 unit isn't the most sociable dawg, so the Militant tries his best to acclimate it to (dog) society. It doesn't always work though.

The Militant even tried to calm the K-9 unit down as it continued to bark and pull on the leash as the Militant looked west, covering the almost-setting sun with his hand, and enjoying the unobstructed view of the Baldwin Hills and the silhouetted Century City-Westwood skyline. He could even see the whitish glow of the marine layer looming in the distance where the ocean would be. And the first thing going on in the Militant's mind was, "This is going in the blog."

The Militant took the K-9 unit elsewhere in the park, especially to the art park's main gallery which was sporting an exhibit which runs until the end of the month. Naturally, the Militant's first inclination would be to cover it, but not only would he worry about where to park the K-9 unit, or remind himself that he forgot to bring the Militant cam again, but the gallery was closed for the day. But the Militant shall return.

In today's 21st century urbia, our lives get too busy with responsibilities and purpose, sometimes it's worth it to take a "stop and smell the roses" kind of moment with even a familiar area institution, to see it from another perspective. Maybe that's why this city never gets dull or boring for the Militant.
Commandeered by Militant Angeleno @ 9:01 PM