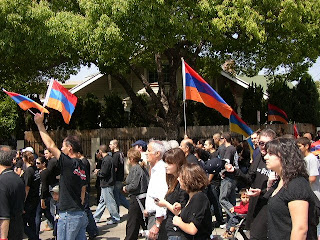 If you had your craving for Zankou Chicken today only to find their doors closed, there's good reason.

Every April 24, Armenian businesses in Little Armenia, Glendale, Pasadena, North Hollywood and elsewhere close down for the day to observe the Armenian Genocide, a series of mass killings of some 1.5 million Armenians in the early 20th century by the Ottoman Turkish Empire.

Though the Genocide ranged for a number of years (between 8 and 29, depending on scholars), April 24 is recognized as a day or remembrance in the community as on this day in 1915, around 250 Armenian intellectuals and community leaders in Istanbul were rounded up, taken out to the desert and stoned to death, making it easier for the Ottomans to mass-exterminate the rest of the Armenian community. Without the intellectuals and leaders, many of the remaining Armenians, misled into believing they would be safely relocated or drafted into World War I, were easily killed off.

Decades later, as a direct result of the Genocide, most of the surviving Armenians went off to Greece, Persia, Lebanon, France, Russia and the United States. The Boston area is where the American end of the diaspora first settled, and soon spread to farming communities such as Fresno, CA. From there they arrived in the city to form the community that exists today. 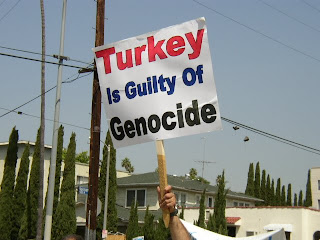 At around 11 a.m. this morning, some 30,000-plus Armenian Americans of all ages, most clad in black, marched through the major streets of Little Armenia, waved flags, banners and signs and chanted slogans like, "1915 Never Again!" "Shame on Turkey!" "Turkey Run, Turkey Hide, Turkey Is Guilty of Genocide!" "We Want Justice!" and the equivalent in their native language. They were led by chant-leaders riding in PA-equipped pickup trucks that slowly rolled along the march route and fellow pedestrians shouting through megaphones. Several hundred more, circling the neighborhood in search of parking (the Militant got there easily on his bike, of course), used the time to cruise around in their cars, nearly all of them adorned with blue-red-and-orange Armenian-flags. 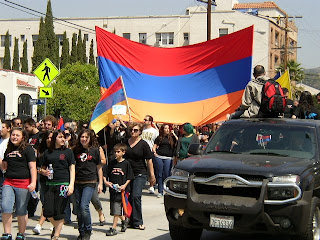 Their concern and anger is rooted in a singular 93-year-long frustration: That the Turkish government of today still refuses to admit the Genocide ever happened. Unlike modern Germany, who long ago atoned for its Nazi sins during the Holocaust, the Turkish government simply wouldn't budge. Which makes the issue even more complex than making a simple token apology: Today's post-9/11 America likewise refuses to exacerbate an issue that could risk losing one of their few allies in the Islamic world. But of course, had Turkey dealt with the Genocide issue been dealt with years ago, that wouldn't be an issue today.

Earlier this week, the Militant had a long conversation with one of his trusted Armenian operatives to talk about the issue and to get his thoughts. Like many things, nothing is simple.

The Operative did the march years ago, but doesn't much care for it today. Not that he doesn't share their sentiment -- the operative is very proud of his Hye heritage -- but that he felt it sends a wrong message.

"Many of my non-Armenian friends ask whether we won a soccer championship. I don't like how it portrays us. It's almost like a party atmosphere. I prefer the march to be a silent one," the Operative said.

But then it goes even further than that.

The operative recalled when another non-Armenian friend of his witnessed the march.

"She said, 'I see so much hatred there.' Is this how we solve the issue?" The Operative said.

To a passer-by, it does look like a classic case of long-running ethnic strife: Iranian vs. Iraqi, Catholic Irish vs. Protestant Irish, Korean vs. Japanese, Palestinian vs. Jew, et. al. But the Operative explained it wasn't even as cut-and-dry as that. The average Turk recognizes the Genocide. Turkish intellectuals recognize the Genocide (at times, that action costs them their lives). The Operative also explained that hundreds of Turks were killed in the Genocide as well -- because they refused to kill Armenians. It is the government that does not budge. But, the Operative added, many Armenians today easily overlook that.

The Operative told the Militant a story a few years ago when he worked at an unspecified book store. A female customer with an Armenian surname (fyi to those that don't know, generally ends with the letters "-ian" or "-yan") on her credit card made a purchase at his register. He said he ttempted to speak to her in Armenian but met a, "Sorry, I am not Armenian" reply. She went on to explain that she was in fact Turkish, who happened to be married to an Armenian.

The Operative gave her a pretty generous discount on her purchase. He recalled that she asked him, "Why are you doing this for me?"

"It is because we are neighbors," replied the Operative, who sent her off with an embrace. Tears of gratefulness and relief proceeded to fill her eyes.

Nearly a century later, as an entire community marches in the streets again and long-standing cultural sentiments refuse to budge, an individual can go much further and make a difference with a simple gesture.
Commandeered by Militant Angeleno @ 1:32 PM

Oh Hye there! i wore my black today. I couldnt attend the march but I did have lunch in Glendale with the Sith Attorney today.