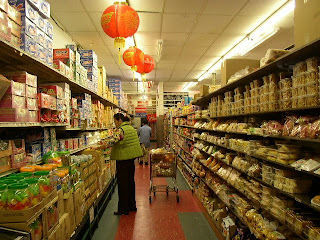 The Militant is, first and foremost, an urban animal. Even if you plucked him out of his native environs and (forcibly) transplanted him into another metropolitan area, after the kicking, screaming and inevitable sedation, he would likely, as he does here, not want to venture out into the suburban netherworld.

Say, "Pan-Asian Grocery Mart" where the expected answer would be "99 Ranch Market" and the Militant will suggest A Grocery Warehouse in Echo Park. 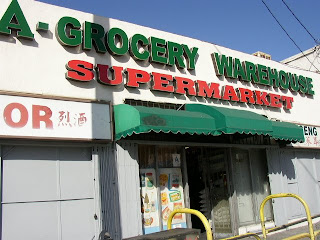 He's passed it by, on bike, bus and car countless times in his life, yet only recently "discovered" the place, on a recent ticket-fetching trip to Dodger Stadium (Ha, you thought you could get away from any Dodger/baseball references, eh?). The Militant discovered it to be a veritable immigrant Asian food paradise, with everything from pallets of Yeo's Chrysanthemum Tea cans from Malaysia, the ever-ubiquitous Vietnamese American Thai hot sauce, Sriracha ($2.29 per big squeeze bottle) , purple ube ice cream from the Philippines, a pickled vegetable deli, an entire aisle devoted to noodles, an entire refrigerated section devoted to tofu, a Great Wall of Tea, a produce section with local and international fruits and vegetables (everything from oranges and tomatoes to Korean pears and Chinese cabbage), a meat and seafood section (one of the Militant's operatives goes here frequently for the big-ass bag of fresh shell oysters, currently selling for $30 for a bag of 60), pots, pans, bowls and teacups, and various sizes of rice cookers and dispensers. Another one of the Militant's operatives was recently able to find a full-sized durian fruit here.

About the only thing Asian you can't find here is Japanese nori or rice crackers (again, this is a market catering to Asian immigrants, not Asian expatriates), but one can find that stuff a couple miles southeast anyway.

What makes this place rock is the sheer value. You know those chopped coconut "containers" filled with coconut juice you get at the local Thai restaurant for $3 or $4 a pop? You can find 'em here -- for 89 cents each.

There's even a small "food court" counter in the middle of the market that serves tropical fruit smoothies and cane juice (with the obligatory boba option) and various fried street-food appetizers.

The Chinese-owned establishment is popular with the local Cambodian, Filipino, Thai and Vietnamese population in and around Echo Park, but it even stocks tortillas, spices and canned goods catering to the neighborhood Latino population. It even stocks the requisite dairy and paper goods products found in mainstream supermarket chains, so it functions as a full-fledged neighborhood grocery, no matter what linguistic group you might hail from.

Therein also lies the beauty of the place: At any given moment, you can hear at least five different languages spoken inside the market: The market staff chat in Mandarin, a mother talking to her young son in Spanish, two middle-aged women gossiping in Thai, an Asian American couple chatting in English and a Filipino man having a cellphone conversation in Tagalog.

Surely the sterilized suburbanite who would naturally prefer a Ranch 99 would scoff at this place and call it "ghetto," with its makeshift layout consisting of three distinct storefronts whose adjoining walls were torn down at one point, as well as the funky "intersection" where the Sunset cross-street (McDuff St) seemingly becomes part road, part parking lot driveway. But if you don't get it by now, you probably never will.

So what does the "A" in the "A Grocery Warehouse" name stand for? "Asian," "Awesome" and "All That."

Purple Ube ice cream? That stuff is awesome. I've never seen it outside of my favorite SF ice cream place. If you didn't try it yet, I highly recommend it for your visit to this place in EP.

Glad to have you back on the left coast, btw! :)

295bus...If you love ube ice cream, you must try the ube shakes at Oinkster in Eagle Rock. It's probably the best purple food item on earth!!

What was up with the new york takeover yesterday. Esplain please.

This blog has done much to expand my NorCal-centric worldview :)

In line with my new philosophy of, "if you're going to cheat on your diet, do it with style" I think I'll have to check out Oinkster on my next visit.

Mike - Magnolia all the way. It's old school ube ice cream, yo! Though Selecta has those neato yellow ice cream carts in the Philippines with the catchy jingle:

Glad to have you back, Militant.

Chicanaskies: Don't call it a comeback, the Militant's been here for years!

They have Nori. I think it's in the tapioca bead aisle :-)

Danielle: They have laver, which is the Korean, flavored version of nori. Similar (great as a snack by itself btw) but you can't roll sushi with it. But if you're right, the Militant will have to look again next visit.

M.A., I'm right :-) I just bought some on Thursday (in Japanese packaging)and made some semi-fabulous cucumber rolls. They sell for $2.29 for a pkg of 10sheets.