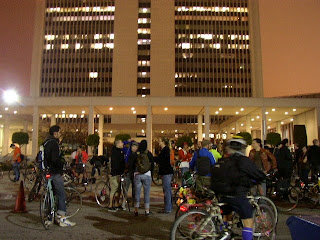 Friday night found the Militant venturing into The Westside on bike, to join roughly a hundred cyclists on the monthly Ride-Arc edjumakational rides through various sectors of this great City.

The theme for this month's ride was "Community / Public Space/ Security" - a demonstration of the various uses of public space and security, in how there are various classifications of public and private spaces which people may or may not use (no, really, seriously) according to their intended purpose. Additionally, the ride also touched on how public and private spaces are utilizing surveillance methods (i.e. cameras) for a (true or false) sense of security.

The 22-mile ride, which circled mostly in the Westside, started at the parking lot of the U.S. Federal Building in Westwood, home to various protests, passport renewals and a place to park to take the Hollywood Bowl shuttle bus.


Mile 0, Westwood: "Hey what you guys got going on here? Looks like fun!"
- Middle-Aged Male Passer-By

The Federal Building and the nearby VA Hospital grounds were pointed out as government-owned and funded public land which the taxpaying public was entitled to use -- yet the public largely does not use it. 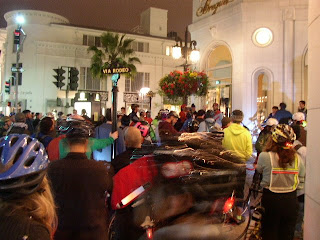 After circling the vast VA grounds - a virtual community unto itself - there was a large iron gate blocked off to automobiles but open to pedestrians, which the cyclists funneled through. They then made their way through Century City into Beverly Hills, where they stopped at Rodeo Drive (pictured left), with a few rich folks walking around with "WTF" expressions on their faces.

Mile 7, Beverly Hills: "Hey, I wanna join you guys...I got a bike!"
- 20-something well-dressed female on sidewalk

Then it was on through Burton Way and 3rd Street, popping out of the Westside for a bit into the Fairfax District where the cyclists walked their bikes through Main Street Carusoville, an example of privately-owned public space, but The Grove's security went looking for Alex, the ride's leader, and told him he wasn't allowed to address the crowd on this tour stop. So the pack continued on across the street to Pan Pacific Park (we seemed to have been here before...) where they were able to stop, at a publicly-owned public space, though in contrast to the Grove's crowds, there was hardly any non-Ride-Arc'ers in sight.

Later the pack filtered through the wide sidewalks of West Hollywood and into the swank residential neighborhoods of Beverly Hills, which, ironically, are ideal cycling streets. After making a stop near some celeb homes, the group headed back out to Wilshire and through to Bel-Air.

Mile 18.5, Holmby Hills: "What are you people doing in my neighborhood?"
- Some dude in an SUV

After a brief stop in front of spacious Holmby Park, the pack rode up to the gates of Bel-Air. No Fresh Prince to be found, but the riders were briefed on a little bit of the community's history a once the home of Los Angeles' uber-rich, now relegated to the home of regular rich folk. It was on the way back out that a few cyclists took some spills and had some minor collisions with each other on the curving, unlit streets.

Eventually the ride went to the UCLA campus, which, as many of you may or may not know, may or may not have been the Militant's alma mater. The riders rode through Dickson Plaza and Bruin Walk, the Militant may or may not have had nostalgic pangs of pride. Finally, the group stopped in between Pauley Pavilion, home of the recently-eliminated Bruins men's basketball team (yay or boo), and the Intramural field, which is a large open space on the campus which campus security frequently discourages its use. This ended the ride, which left the riders either returning back to the Federal Building or heading home through various means. The Militant, too headed back to the compound via unspecified means.

As always, the Ride-Arc rides provide an excellent educational tour, as well as a way to discover not only the streets of the City but some awesome cycling routes. Many of the previous Ride-Arc rides retraced familiar treading ground for the Militant, but, though rarely wandering into the Westside, he was totally down for exploring some never-explored-before streets.