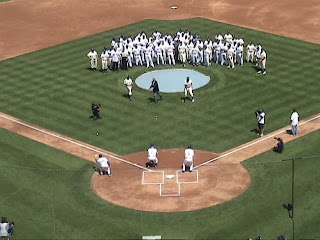 Even the Los Angeles Times' Bill Plaschke was impressed. Everyone's favorite Dodger was there -- surely the ones from the Militant's childhood were on the field on Monday -- unless you're under 25 or so.

Make no mistake, the Militant thought it was a magical moment. Surely Koufax, Snider, Newcombe, Garvey, Cey, Valenzuela were rightfully there.

Of course, representing the '90s Dodgers...Eric Karros and Matt Luke.

Now Karros, a Dodger broadcaster employed by KCAL-9, had to be there anyway. Luke? Well he sells real estate these days, so the onetime first baseman and outfielder from a decade ago probably said "yes" before the Dodger staff even started to ask. The Militant isn't so much as criticizing the talent and impact of those players as much as he wonders why, of all the five consecutive Rookies of the Year from that decade, only one of them showed up. Hey, Mike Piazza probably didn't have anything better to do this week. It certainly would have been a kick to see Raul Mondesi again.

And how about the '88 team? Okay, granted half of them are on the Angels' coaching staff now, but what about the two most notable players associated with that team? Kirk Gibson's may still be occupied as a Diamondbacks coach, but surely Orel Hershiser could have made the trip. Unless of course he's just trying to keep a low profile these days because of some music video made 22 years ago that's gotten some viral attention as of late.

But then again, this is the 2008 San Francisco Giants, who have already been mathematically eliminated from this year's playoffs, and who lost an exhibition game to their own farm club last week. So this opening series is like shooting fish in a barrel, basically. Only time will tell until the Dodgers fare against real teams.

So Go Blue and Stay Militant! It's gonna be a great season.
Commandeered by Militant Angeleno @ 12:03 AM