Vlogstyle Contest: A Winner Is You! 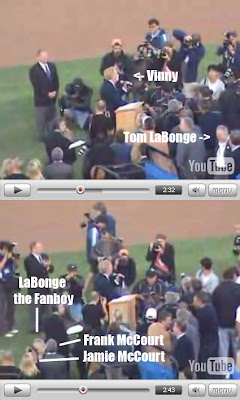 Militant congratulations to Robert Joyner of Monrovia who correctly spotted city councilman Tom LaBonge popping into the frame at 2:31 on the Militant's latest "Vlogstyle!" episode at the Dodgers' Coliseum game last weekend.

For those who missed it, LaBonge shows up on the lower right-hand corner of the screen? (viewer? app? YouTube thingie?). Known for being quite the shutterbug, the councilman, camera around his neck, walks towards the left of the screen and at 2:35 approaches Dodger VP Howard Sunkin, who points to the McCourts to his left. LaBonge steadily sets up his camera, dashes towards the McCourts and at 2:43 he suddenly pops out, in total fanboy mode, to snap a picture of Dodger president Jamie McCourt .

As the winner of the Militant's contest, Robert wins a pair of field level Dodgers season tickets a 2004 limited-edition Tommy Lasorda Collectible Coin (still in its original packaging) and a 2008 Dodgers Pocket Schedule with Brad Penny and Don Drysdale on the cover. Okay, so the Militant picked these up for free at the stadium at various times, but the Lasorda coin is currently fetching $6 on eBay...