The Militant Is Alive And Well 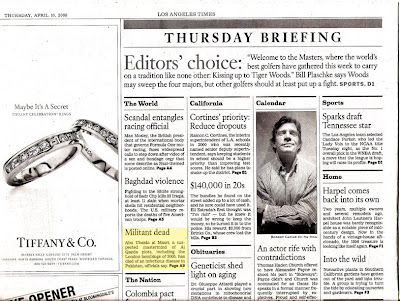 The Militant checked his sbemail Thursday and found a flood of letters (okay, a couple) from loyal militant readers wondering if the Militant was okay. Why the cause for concern? Perhaps after skipping a day after a recent post surge, but the Militant has taken breaks before (maybe too many, as February 2008 has proven...all five posts worth). But one of the emails pointed out that on Page A2 of Thursday's Los Angeles Times (pictured above), one news brief heralded:
"Militant dead."

Hey now! Of course, upon further reading, they were talking about an entirely different kind of Militant, eh heh heh...

Perhaps his East Coast Mainstream Media enemies may or may not wish for the validity of the news brief, but to paraphrase Samuel Clemens (c'mon, say it together now...), rumors of the Militant's demise have been greatly exaggerated.
Commandeered by Militant Angeleno @ 3:08 AM