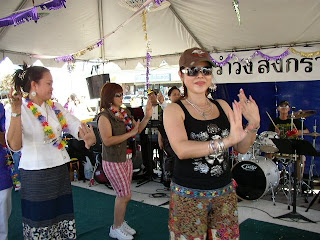 Though The Militant keeps his personal life a secret, it's no secret that he's totally down for the variety of cultural festivals this great City has to offer.

So despite the 92-degree weather beating down on the heads of a Dodger Stadium-capacity sized crowd, the Militant was definitely there on The Boulevard to take part in this year's Songkran, or Thai New Year Festival.

Now, the term "Songkran" does not mean "new year" in Thai (that's "pi mai"), but rather, "to pass or move into," which refers to both the astrological origins of the new year date (the movement of the Sun into Aries) and the cleansing and renewal rituals that accompany the holiday.

In Thailand, Songkran is celebrated during the hottest time of the year. Certainly in that regard there was more than a hint of authenticity in both the festival and climatic atmospheres. Fortunately for this festival, a pair of women in front of The Stone Bar splashed cold water no passers-by, a man standing outside the Siam Square import store spritzed the crowd with a bottle and large water vapor fans kept the Singha Beer garden patrons cool. The splashing of water is part of Songkran tradition, both as a cleansing gesture and to keep people cool. 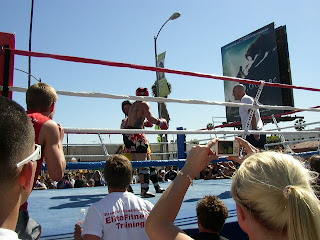 The Militant will just say this: Of all the cultural festivals in Los Angeles, Songkran is perhaps the best of all. Not only is there the expected cultural entertainment, arts & crafts, commercial vendors and food (yes, there was chicken satay, but c'mon, this is a freakin' Thai festival, after all), but sports (Muay Thai kickboxing, pictured right), a beauty pageant, a parade and dancing (pictured above). This year the festival nearly doubled in size, extending this time to the entire length of the designated Thai Town area (the strip of Hollywood Blvd from Western to Normandie avenues) and, for the first time incorporating a 5K benefit race and a Curry Festival (which, like its processed soybean cousin in Little Tokyo, was a fundraiser for a local nonprofit). It was an action-packed festival for young and old alike. It functioned as an annual convening nexus for the Southern California Thai community (which the Militant may or may not be a part of), numbering about 60,000, and as a taste of the culture for non-Thais (another group which the Militant may or may not be a part of). 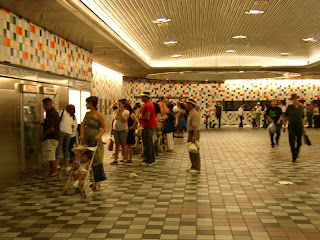 The Militant also gave the festival massive points for being extremely transit-accessible, as the (M) Red Line Hollywood/Western station was practically part of the festival space, with riders from all over the Southland emerging out of the station every few minutes. In fact, as the Militant left the festival for the first time, there was a long-ass line to get to the sole pair of ticket machines in the enture station (pictured left). There were also scores of bicycles securely tethered to not only the Metro station bike racks, but numerous sign and light poles all along the Boulevard. People who did opt to take the auto were guided to various off-site lots and shuttled in. This is how it should be done.

For those who ignored all of the above and ended up crawling around the cordoned-off streets the whole day, vainly hoping to score a parking space -- sucks to be you!

Granted, the sheer heat coupled with the plethora of activities left the Militant quite overwhelmed, and instead just decided to chill with operatives in a shaded area, as many attendees did. Basically anything that cast a large shadow anywhere functioned as shade. The Militant also anticipated stuffing his Militant mouth with the product of the more than two dozen Thai food vendors who came from all over SoCal, but instead just settled for some mango and sticky rice and, yes, a stick of chicken satay.

The festival gradually shut down as 6 p.m. drew nigh and the Militant left the festival to take care of some unspecified matters. He did return at about 7:30 p.m. just to bask in the too-awesome warm post-sunset climate, which bore a good helping of humidity, which, with some imagination, made the Militant feel just like he was in Thailand -- a place which the Militant may or may not have visited. There were still a few stragglers in the crowd as the tents went down, the vendors packed their wares and street traffic was haphazardly re-introduced into the Boulevard. The Militant kept on imagining, dreaming of a Songkran After Dark, lights strewn around the street and people still on the Boulevard, still walking, talking, browsing and eating, all basking in the warm evening air as the glow of the purple-orange sky lingering to the west provided the ideal backdrop. One day...

But as evidenced in the sleep-deprived weariness of many of the Militant's operatives who actually worked the festival, maybe that would be too much to ask. The Militant gives a (camo) hats-off to all who put this festival together -- a jorb well done. Suksan wan Songkran! 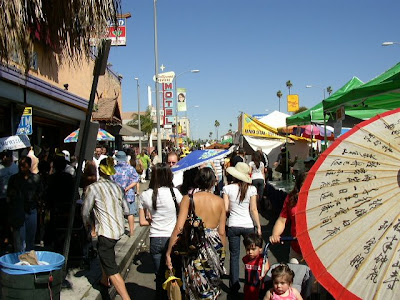 The Obligatory Street Crowd Shot: Ya know it! 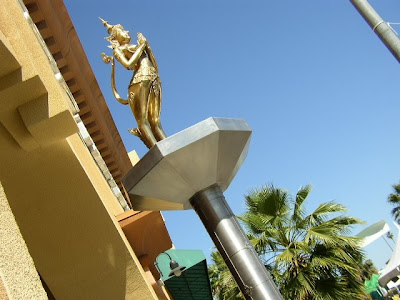 Two Down, Two To Go: The newly-installed Apsonsi #2 stands guard over the festival. After nearly one year, Thai Town Gateway symmetry finally achieved! 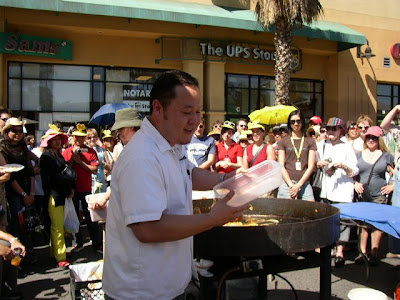 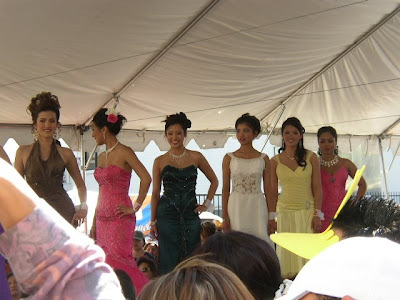 Don't Hate Them Because They're Beautiful: Contestants for the Miss Thai New Year 2008 contest pose before the crowd; The Militant tries in vain to get the attention of the one in dark blue. 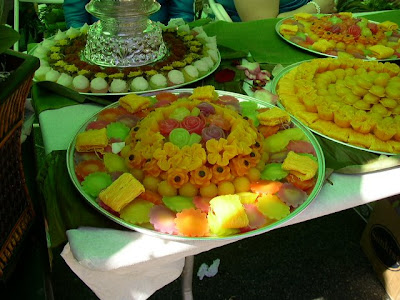 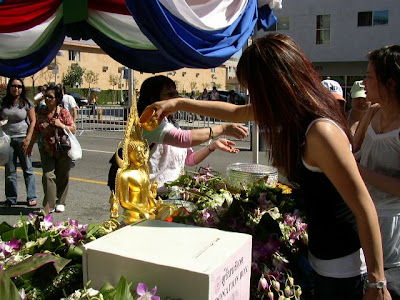