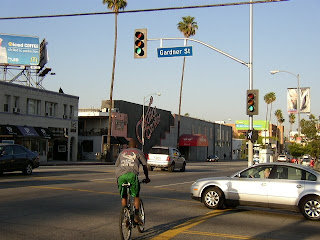 For guitar- playing Angelenos (no, not the ones who sling those guitar-shaped video game controllers around their necks and press colored buttons), the 7400 block of Sunset Blvd, at the corner of Gardner St., is familiar territory. They can name a Benjamin Buford "Bubba" Blue-type litany of anything and everything guitar-related in the neighborhood: From the rustic acoustic realm of Valdez Guitars to a couple vintage used axe boutiques to manufacturer outlets for the Carvin and Mesa Boogie brands to the big multi-instrument chain emporiums of Sam Ash and the monolithic dark-grey flagship store for the Guitar Center chain (pictured above).

As the Militant rode through the area on his bike on Friday, he wondered, but for why, of all places in the City, is there such a curious concentration of six-string stores? Is this stretch of Sunset specifically zoned for the sale of fretted, stringed instruments? Was there an influx of guitar slingers who immigrated here and formed their own community? 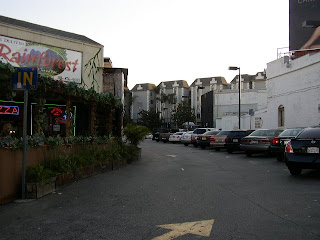 Let's go back to the late 1940s, back when Pacific Electric Red Cars ran diagonally (the oddly-shaped parking lots on the northeast and southwest corners are remnants of the old Red Car right-of way, pictured right) through Gardner Junction, as it was known back then, from Hollywood Boulevard to a place called Sherman (now known as WeHo). A certain guitar-playing Midwesterner moved into the neighborhood from NYC. But he was no ordinary guitar player. He was a renaissance man of sorts, not only tinkering with strings and things, but building circuits and other gadgets. He was known at the time for backing up his musical and matrimonial partner, singer Mary Ford. Hie name was (and still is, he's pushing 93 these days) Les Paul. 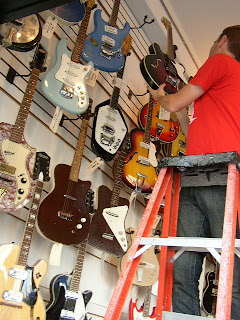 Paul, in addition to his guitar playing skills, is also an inventor, being one of the pioneers in developing multi-track recording, which allowed musicians to record separate layers of instruments at their own convenience, rather than recording everything all at once. He also invented various musical audio effects, which are still used by musicians and recording engineers today. And he wasn't that bad of a luthier, either. Heck, a well-known electric guitar he invented bears his name.

Paul not only lived in the Gardner Junction neighborhood, but he set up his own laboratory in his garage. Musical instrument manufacturers and retailers, many of whom were personal associates of Paul, wanted to be in close proximity to his lab, so they set up shop along Sunset.

The stores remained even after Paul packed his bags and returned to the East Coast. In 1959, electronic organ salesman Wayne Mitchell opened a store on "Guitar Row" called "The Organ Center." A few years later, as Beatlemania invaded America, he sold Vox brand guitars and accessories and renamed it "The Vox Center." A few years later, he renamed it, "Guitar Center," which operated directly across the street from the current store. The modern-day Guitar Center edifice opened in 1985 and sports the "Rockwalk," a tourist attraction of sorts featuring the handprints of famous rock musicians.

Even the nearby stores do not escape the guitar/music pedigree of their neighbors: Thai restaurant Toi on Sunset is adorned with rock & roll memorabilia and sports the slogan, "Rockin' Thai Food!" The Ralphs supermarket a few blocks east is commonly referred as "Rock N Roll Ralphs" due to an unusually high ratio of rock musician clientele there. And next door to Guitar Center is the Sunset Grill burger stand, where rocker Don Henley watched the working girls go by and immortalized the experience in a 1984 hit song.

Stay Militant, and Rock On!

Commandeered by Militant Angeleno @ 12:38 AM