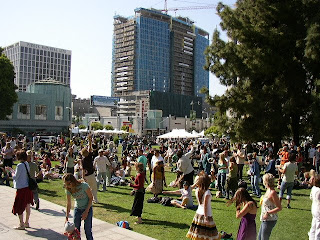 Drawn by the streetlight banners that hung over this City's other great boulevard in the past several weeks, the Militant made it down to the first-ever Wilshire Center Earth Day / Car Free Day Festival on Tuesday along Henry Gaylord Wilshire's namesake thoroughfare, between Western and Harvard to celebrate Urf Day.

Now, as you may or may not know the Militant by now, many days of his week are already Car -Free days, so really this kind of day is like a Lenten Friday for a vegetarian Catholic. But still, the Militant skeedaddled on his trusty two-wheeler, this time down the nice, bike-friendly corridor of Serrano Avenue, where he found a lively street festival and an even more lively crowd in front of the fest's entertainment stage at the Radio Korea building's front lawn (pictured above - nice use of open space, btw).

The festival location was Metro-accessible (the festival was bookended by two (M) Purple Line stations), but it seemed the mode of choice was la bicicleta, (excellent, as it gave the Militant an opportunity to blend in with the crowd, and not become easily recognized). The Los Angeles County Bicycle Coalition had their bike valet get-up, a free service which the Militant may or may not have taken advantage of. 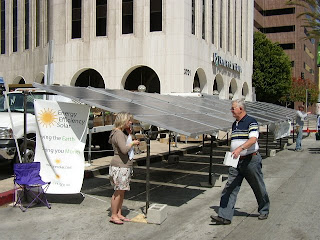 The booths featured what you'd usually expect to see from an eco-oriented event: Environmental awareness/advocacy groups, Green-conscious merchandise, non-profit organizations and alternative energy demonstrations (pictured left). The Militant, who is eco-conscious yet can't stand the whole hippie-dippie culture thing was pleased to see this was a festival that did reach out to everyone. The trilingual signage reflected the local English, Spanish and Korean communities and people of all ages - from the little tykes who came in groups bearing the bright violet L.A.'s Best and bright green KYCC t-shirts to the older set.

The Los Angeles Eco-Village booth caught the Militant's attention, not because of their recently-inaugurated Bimini Place Shared Street project, but because they had a historical display of the old Bimini Baths, which stood near the present village, which not only showed wowee pictures of the old days, but depicted Sacatela Creek (sorry, no pictures online), a natural perennial stream which once ran from the Los Feliz area down towards Ballona Creek, but was ultimately replaced by an underground storm drain and filled in the 1930s (boo!).

There was live musical entertainment, some of it that hippy-dippy folksy stuff the Militant couldn't stand, but thankfully on the big entertainment stage there was a variety of live music, headlined by Michael Franti (of Disposable Heroes of Hiphoprisy and Spearhead fame), as well as acts that ran the gamut from hip-hop to reggae to latin to electronic. 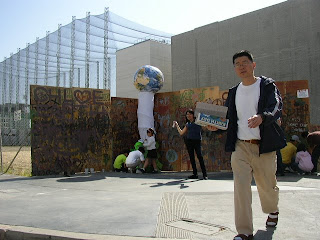 Spurred by the whole we- gotta- eschew- plastic- bags- like- right- now movement, the hottest item at the festival by far were reusable grocery bags, being given away by sponsors like the overpriced Whole Foods Market. Thing though, he saw a lot of greedy people out there walk around with a half-dozen or so bags, leaving very few or none for people who came looking for them. Learn to share, people! The Militant got a little agitated at the lack of their ability he threatened one vendor vowing to continue to use plastic bags unless he got his reusable. But he quickly calmed down once he found a dude handing out reusable bags printed with the logo of the Belmont Station apartment complex - incidentally built right in front of a famous Pacific Electric Red Car relic.

But two middle-aged women asked the Militant in Spanish where he got his green bag. El Militante regretfully had to tell them, "No mas." But hey, it's a good sign these things are more in demand these days.

The Militant also found time to chat with several operatives, one of which worked in a nearby building (but didn't do the car-free thing, boo) as well as running into some familiar faces who also pedaled it in (if there are any transplant n00bs reading this (probably not very many as the Militant has probably scared many of them away), when you run into people you know randomly on the street, it makes our city feel much smaller. Remember that).

Word on the street was that the event's organizers, who longed to do this kind of event for quite a while, deemed the event was a great success and plan to make this an annual affair. So make your car-free, green-baggin' plans for Wilshire Blvd come Urf Day '09.
Commandeered by Militant Angeleno @ 7:23 PM

Yes, that area is familiar to me, somebody mentioned the advertising signs as too bright for a residential area and that it could keep people awake at night.

Too many people are rushing for free stuff only to horde them or not use them as originally intended. Maybe I will have to sew my own recyclable bag...

Sorry, this will not be an annual event. Don't for get to link Wilshire Center (wilshirecenter.com), because it was the Wilshire Center Business Improvement District (WCBID) that put this whole thing together with the support of their parters Earth Day LA and the CRA. Great blog.