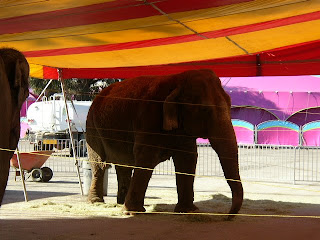 The Militant, having to spend the entire day Thursday in The Valley for unspecified reasons (okay, one of them had to do with routine car upkeep -- his car went in for a 25,000-mile maintenance service -- an auto that was purchased new in Summer 2005. Low miles! Looks like all that bike riding has been working!). But after his appointment with an unspecified SFV dealership's service department, he found himself heading east on Roscoe Blvd, killing time until his next appointment, and lo and behold, right by Tobias Avenue, the Militant saw...

Actually there were three of them. WT...oh there we go. A bright, shocking pink tent pitched further back on a vacant retail lot that used to house the local Montgomery Ward parking lot was a telltale sign that the circus had come to town.

Or rather, el circo.

Los elefantes were part of Circo Hermanos Vazquez a Mexican circus troupe whose US-based division travels around the country to send in los payasos for performances in Latino metropolitan markets. Having done a stint in Huntington Park last month, Circo H. Vazquez is currently in the middle of its Panorama City run, from April 4 to 21.

As the Militant snapped away on his MilitantCam, various local children, there after having been dismissed from school for the day. clung to the chain-link fence to catch a glimpse of the African elephants, chowing down on grass. Some of the kids' parents, talk to them while pointing to the animals. Looks like someone's gonna be going to see the circus this weekend.

Commandeered by Militant Angeleno @ 3:24 AM

I can corroborate your story. For I myself saw this elephant you are talking about. Last Sunday after church I went with a friend to the Panorama Mall and saw the circus tent. I have never been to this circus but I do enjoy them. If I recall correctly, last time they were here they put up tent in North Hollywood at the Valley Plaza in Victory and Laurel Canyon.