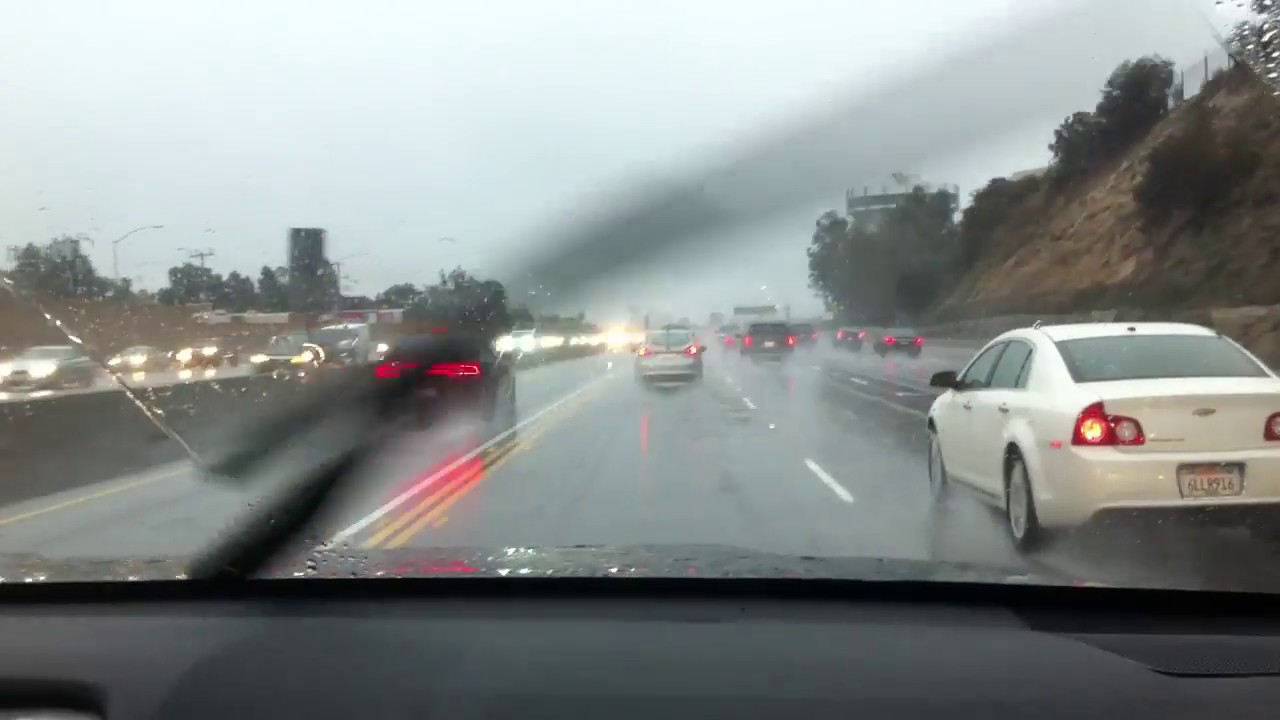 For some reason there's been lots of grey clouds in the sky,
and there seems to be drops of water falling down...

Yes, it's raining again, and that means one thing: The time when our city's transplants (and transplant-biased media) love to declare that Los Angelenos cannot drive in the rain.

In addition to other things this native Militant
has to hear them beyotch and whine about (and those transies sure do love to whine!), the rain thing takes the cake (left out in the rain, in Macarther MacArthur Park, of course). First of all, it arrogantly absolves the person making the statement that they, and only they, are the only ones with teh l33t driving skillz in the entire region. Second, it's highly hypocritical on many levels, especially since many of the other drivers are transplants themselves, and there has yet to be any absolute scientific proof that any of them have never caused an accident (on another level, most transplants proudly declare that they prefer follow scientific logic and reason as opposed to faith or what others tell them, yet when it comes to matters regarding this City, they use anything but scientific logic and reason and rely on the preconceived notions fed to them by others...hmmm....). And lastly, it's ludicrously presumptive. So what, people from Los Angeles choose to drive bad in the rain? It's what we're taught in our Driver's Ed classes - to ignore all intentions of carefulness once the first drop of rain hits the road (If that's true, then NorCal people shouldn't be hatin', since they have the same Driver's Ed curriculum that we have)? Transie, please! With auto insurance costing as much as it does, do you seriously think we really want to get into accidents when it rains? And what is the crux of the problem? That we drive too fast? Or too slow? Make up your fuggin' minds!

The Militant Mythbuster says "Enough." Here's some food for thought.

• Per Capita, Stupid. Of course, there's a lot more accidents when it rains here. Because there's a lot more cars and a lot more freeways. Duh. The Militant needs to see statistical proof of a higher per capita rate of automobile accidents during precipitation before he would consider lending credence to the generalization.

• It's Not The Driver, It's The Tires. Here is one thing everybody, be they native, immigrant or transplant, totally neglects: Proper tire maintenance. You can be the best driver in history, but your l33t skillz won't mean jack if your tires have lost their tread, causing even the most adept driver to skid and lose control on wet pavement. Such is what caused an accident in late November which a local Jedi blogger experienced while riding in a landspeeder (but don't actual landspeeders, through the use of repulsors, avoid contact with the ground?). When it comes to auto maintenance, we seem to only be concerned with the mechanical well-being of the car and place things like tire rotation and replacement as a low priority. Los Angeles was once the largest tire-producing city in the country behind Akron, OH (hence the existence of places like this) - SO GET YOUR TIRES CHECKED, PEOPLE!
Lastly, and most importantly...

• Suprise! Suprise! We are not the only place in the country where people cannot drive in the rain. When the Militant visited Portland, Oregon - a Pacific Northwest city with abundant rainfall - and rode their light rail train during one rainy night, he and his fellow passengers were forced to disembark and cram into a bus. The reason? A car hit a train further down the line. You'd have thought that Portlanders would have known better - because car accidents in the rain only happen in Los Angeles, right?

The Militant will now provide a (by no means comprehensive) list of sites and blogs from around the country, via his Militant research, which declare the drivers of their respective locales (including some known for frequent precipitation) as people who "Can't drive in the rain."

Austin, TX (look out, Virginia, you got competition!)

Hawai'i (A state which is home to the world's rainiest place)

You get the picture. You might even hail from some of these places. Pwnage is in effect. But on an objective level, it's all a matter of perspective. You don't see the problems of other cities in front of you every day; the only comparisons we are capable of are selective recollections and detail-deficient news reports (The Militant refuses to believe there were no auto accidents during the big Katrina evacuation in '05 - but you'd never hear of it, since that would have been only a trivial part of the bigger story).

So be careful out there (duh) and again, GET YOUR TIRES CHECKED!
Commandeered by Militant Angeleno @ 1:50 AM

I'm glad you wrote this post. I too have been annoyed by all the "LA can't drive in the rain!" comments in the blogosphere. But it does inspire me to write a "Philadelphians can't drive!" post, which is actually true of course, and this is at all times, not just in the rain, lol...then you can add it to your well-researched list.

A couple of other things to consider that I've either read or thought about: We have lots of cars and therefore many oil-slicked roads that are dry most of the year, so when rain falls it makes for a very slippery situation. Also: it doesn't rain very often in LA. Practice helps drivers become better, and there is not much time to practice driving in rain. And when it does rain, streets can flood which of course means your tires are not actually gripping anything.

I am incapable of walking in the rain. I slipped on my way to the bus stop this morning.

I blame the fact that I am from LA.

It needed to be said and you said it well. Thank you Militant!

Doth the Militant remember that I was in New Orleans for Hurricane Katrina? There were no accidents that I recall. But of course that is because we were all doing less than 5 mph during the evacuation.

Unfortunately two of the accidents that I was in was in rainy weather. But one of the accidents was because of those darn hard compound tires that Michelin puts out that gets great mileage.

Nope I can't give you any data to base pro or con, but in neutral territory (Santa Barbara) the N. Californian drivers were trying to convince me that S. Calif. drivers were worse than them.

Philpalm: Actually Santa Barbara is still SoCal. Basically, if your county is larger than one (or more) of those tiny east coast states, you're in SoCal.

Part of the problem is lax driver licensing laws. Just about anyone who can find their way to a DMV office can get a license. DMV publishes instructions in at least half a dozen languages. The whole system is inclusive (rather than exclusive, like airplane pilot licensing). Any move to tighten up requirements would be opposed by AAA, car manufacturers, oil companies and probably newspapers (which get a lot of revenue from car ads). Thus we have people driving Hummers who probably shouldn't be in anything larger than a go-kart.

Bob Davis: The problem with your theory is that drivers licenses are issued by the State of California, and by your assessment, it wouldn't be limited to just Angelenos who are allegedly the bad drivers, but everyone in California. Northern Californians still claim to be superior to Southern Californians when it comes to rain driving.